Turkish-Islamic NGO in Germany complains of defamation by Democrats 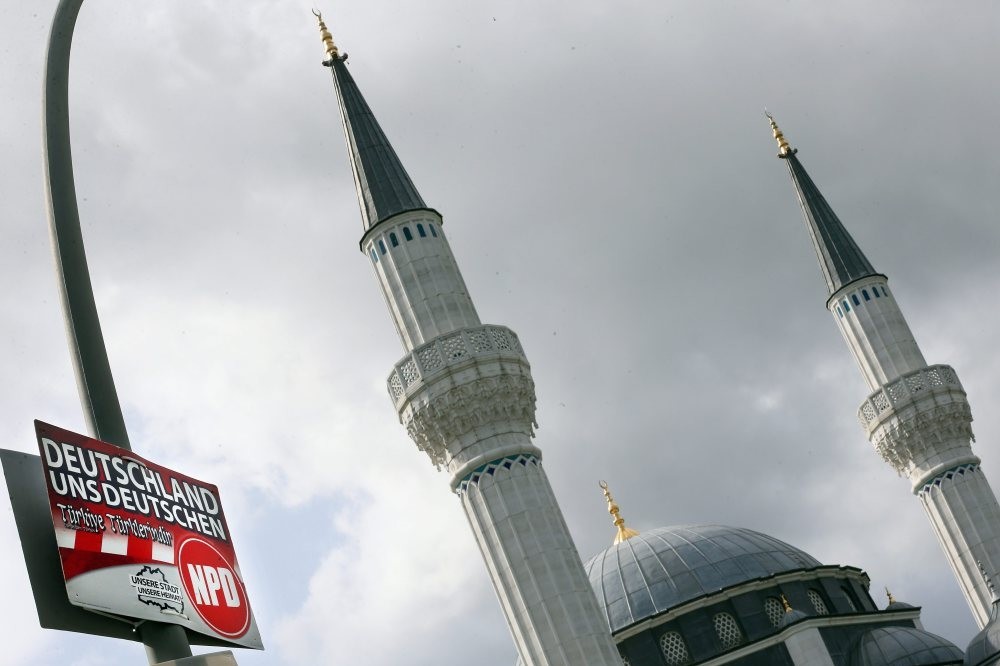 A placard of the German far-right NPD, is attached to a lamppost in front of the u015eehitlik Mosque in Berlin run by the Du0130Tu0130B. The slogan reads: u2018Germany (to) us Germansu2019 and adding in Turkish the slogan u2018Turkey to the Turksu2019.
by Daily Sabah Aug 11, 2016 12:00 am
A nongovernmental organization (NGO) has fired back at Germany's Democrat politicians, who have clung to arguments amounting to far-right views toward Turks and Muslims. The Turkish-Islamic Union for Religious Affairs (DİTİB), one of the largest NGOs bringing together Turkish-Islamic mosque associations in Germany, slammed a campaign of hostility toward the foundation, which has served the Muslim community since 1984.

In a joint declaration published on Tuesday, DİTİB members expressed "disappointment" about a defamation campaign trying to link the DİTİB to political affairs. "We witnessed statements, biased allegations that amount to outright hostility and statements ignoring what we really do and our efforts for a peaceful coexistence in Germany. We feel misunderstood and subject to false allegations and do not deserve to be subjected to an alienating, isolating attitude based on prejudice," the statement said.

The DİTİB was the subject of criticism by several German politicians amid an increase in anti-Turkish sentiment. Volker Kauder, parliamentary group leader of Christian Democratic Union of Germany, said last week, "People of Turkish origin who live here must abide by our laws and our customs." Kauder has expressed "concern" over what he has called the influence of the Turkish government on the DİTİB and Turks in Germany. Kauder was commenting on the DİTİB, which offers Islamic theology classes at schools approved by Germany. He said the DİTİB should not be allowed to "shape Islamic religious education in schools" in its association with Turkey, one of Germany's largest trade partners and a close ally.

The declaration said the allegations of an outside influence, political agitation and claims that the DİTİB was a risk to Germany were unacceptable and said the comments by politicians branded the organization and its every member as "elements of a foreign threat."

"Such discriminatory, defamatory and alienating attitudes toward Muslim communities have been confined to anti-democratic, far-right groups so far but we are concerned that such arguments are finding a place in democratic, mainstream parties now," the declaration said.

DİTİB officials said it was wrong to claim mosques were politicized, as some politicians in Germany said, and mosques were host to a congregation of people of all ideologies and these ideologies or any political struggle have no place in mosques. "Regardless of their political affiliation, people come to the mosques to pray. If anyone disturbs the peace, we intervene. The DİTİB is beyond political parties and does not support any particular ideology. We do not classify people according to their political views and encourage them to exercise their democratic rights," their declaration said.

The DİTİB was also criticized by Greens Co-Chair Cem Özdemir who accused it of being a political entity close to Ankara. Similarly, Social Democrat lawmaker Kerstin Griese made comments about Turkey's influence in Germany's mosques in remarks to German media.
RELATED TOPICS