Nothing has changed since Aylan Kurdi's death shocked the world 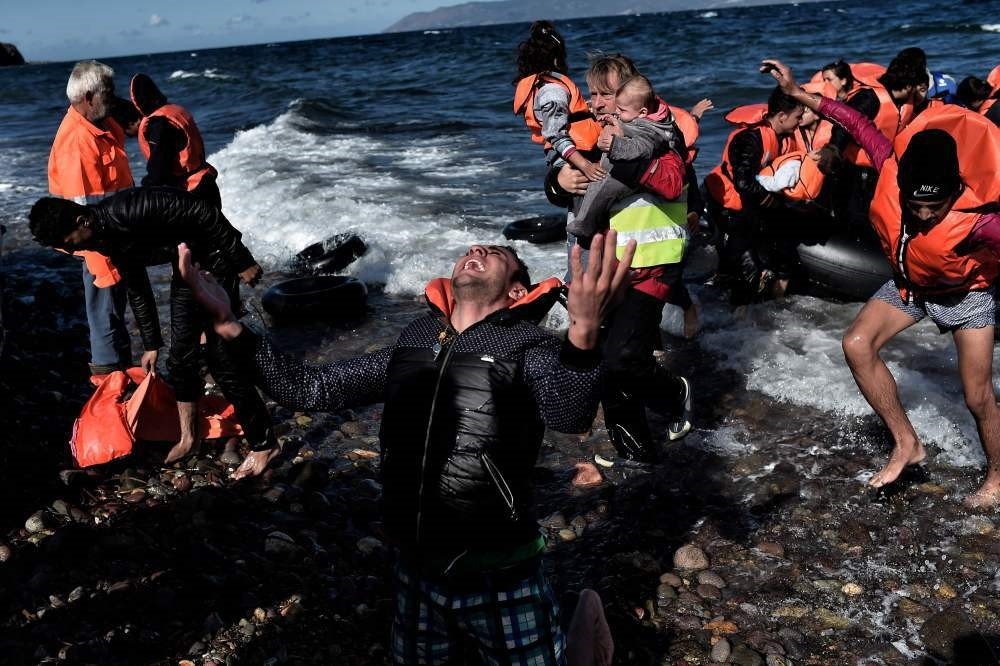 A refugee reacting as he arrives, with other refugees and migrants, on the Greek island of Lesbos after crossing the Aegean Sea from Turkey. (AP Photo)
by Miraç Tapan Sep 03, 2016 12:00 am

It has been a year since the dead body of Aylan Kurdi, a Syrian refugee toddler, washed ashore on the beach of Bodrum, a Turkish resort town, shocking the world and laying the refugee drama bare for the eyes of the entire world. Aylan and his family was trying to reach Canada for a better life through Europe on a fiber boat alongside with 14 other refugees when their boat sank and five refugees, including the toddler, lost their lives. The Turkish police force arrested two Syrian human smugglers who are responsible for the travel arrangements of the people in that boat and the court sentenced each to four years in prison. Following the death of his entire family, Abdullah Kurdi, the father of Aylan, returned to his homeland of Kobani to bury his family and said that he has no reasons left to go to Canada.

The death of the three-year-old boy and the iconic photograph documenting the lifeless body of Aylan became the symbol of all refugees who lost, and probably will continue to lose their lives, in the Mediterranean and raised awareness in the West about the rising refugee problem. The image of Aylan triggered widespread grief concerning the refugee crisis, giving rise to pressure on European countries to do more for refugees, including accepting more. Although it took months for Europe to take action, Turkey signed an agreement with the EU in March about the readmission of migrants from Europe who crossed into the continent after March 20, in exchange for the resettlement of Syrian migrants from camps in southern Turkey to European countries. Moreover, the agreement also included the promise of the acceleration of Turkey's EU membership bid and visa-free travel for Turkish nationals within the Schengen area starting from March. Despite the fact that the EU has not yet passed the decree regarding visa-free travel to the Turkish citizens, the readmission arrangement has been relatively fruitful.

The agreement was followed by a major drop in the number of people trying to land on the shores of EU member countries and a great number of human smugglers were arrested and sentenced at Turkish courts. The first three months of 2016 saw 173 die in Turkish territorial waters, while 279 died in 2015 and 69 died in 2014. Right after the agreement, the refugee deaths and captures in the Mediterranean dropped by almost 90 percent. However, the number of refugees trying to cross the border over Turkey increased by 44 percent and became 779 in July compared to the previous month, marking the first increase since the agreement was signed. The recent increase, which is announced on the anniversary of Aylan Kurdi's death, spread fear into people's hearts once again.

UNHCR spokesperson William Spindler spoke at the briefing at the Palais des Nations in Geneva on Sept. 2 to commemorate Aylan and draw attention to the ongoing refugee drama in the Mediterranean and Aegean Sea.

UNHCR estimates that 4,176 people have died or gone missing on the Mediterranean since the death of Aylan, according to Spindler's statement. As UNHCR's data suggests, 281,740 refugees crossed the Mediterranean and Aegean Seas and reached European soil in the first eight months of 2016. However, the number of refugees and migrants arriving in Greece has dropped dramatically from over 67,000 in January to 3,437 in August, following the implementation of the EU-Turkey Statement and the closure of the so-called Balkan route.

"The main change; however, has been the number of casualties. So far this year, one person has died for every 42 crossing from North Africa to Italy, compared to one in every 52 last year. This makes 2016 to date the deadliest year on record in the Central Mediterranean. The chances of dying on the Libya to Italy route are ten times higher than when crossing from Turkey to Greece," said Spindler.

Although the deaths continue during refugees' voyage to hope, the death of Aylan Kurdi evoked sympathy and solidarity for refugees all over Europe, with many people volunteering to help and spontaneously giving food, water and clothes to refugees and even offering to take them into their homes. Yet, Spindler pointed out rising hostility towards refugees taking shelter in Europe as well. He said that migrants are suffering racist and xenophobic attacks, prejudice and discrimination. He said that the ongoing challenge for Europe and Europeans is to support the integration of these refugees and help those to contribute to the society in which they take refuge in, adding migrants should be taught new skills, determination and cultural richness, which they will need to rebuild their homes and countries.
RELATED TOPICS