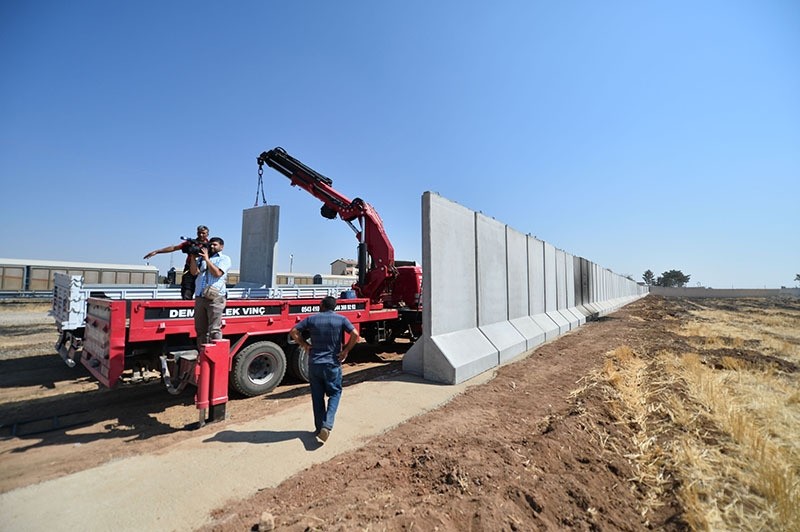 The Turkish army and police are securing the construction of a concrete wall along the borderline with Syria with a view to maintaining security across the Turkish border, governor of the south-eastern Şanlıurfa province, Azim Tuna, said Saturday.

The wall construction is taking place amid strict security measures along the border of Suruç city, where one of the most important routes is located, which was used to connect the PKK terrorist organization with PYD, the group's wing in Syria.

Provocations by PYD members, however, continue at the borderline in an attempt to hinder the construction process.

Tuna visited the site of the wall construction on Saturday, accompanied by Suruc governor Abdullah Çiftçi and senior police and army officials.

Speaking to reporters, Tuna asserted that the wall construction will be completed.

"The problem as we stated yesterday is caused by those who do not want the wall to be built. It is clear that PYD's usage of civilians is meant to hinder the work on the border," he said.

He asserted that "biased disinformation" is taking place, denying claims that clashes and injuries occurred yesterday and that work was continuing smoothly amid security measures.

Turkey shares a 900-kilometer (559 miles) border with Syria, which has been embroiled in a civil war since 2011.

The Turkish Armed Forces are boosting security on the Turkish side by putting up the concrete walls and, on the Syrian side with coalition air forces, through Operation Euphrates Shield.

Turkish military units are erecting the modular walls along the Turkish-Syrian borderline between Suruç, Şanlıurfa and Karkamış, Gaziantep.

The operation is in line with the country's right to self-defense borne out of international treaties and a mandate given to the country's armed forces by the Turkish parliament in 2014 and extended for another year in September 2015.

Operations by the Turkish Armed Forces, which have been actively fighting Daesh, have significantly contributed to ongoing efforts of the U.S.-backed international coalition against the terror group.