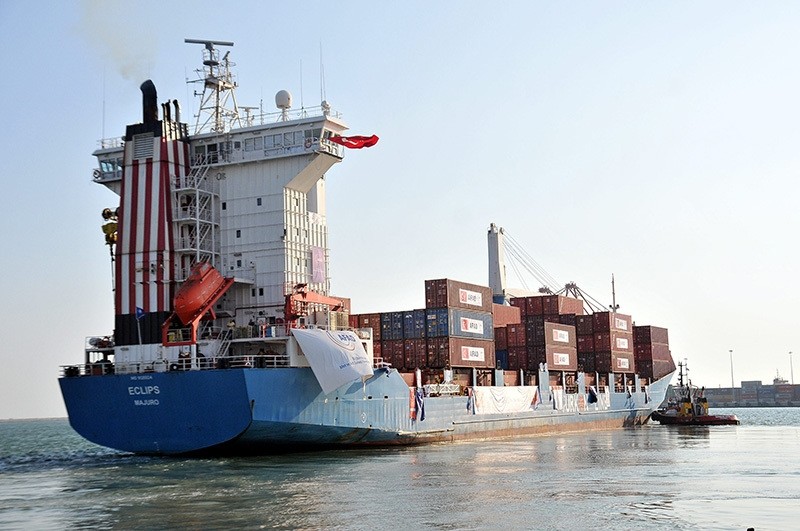 A second Turkish ship loaded with humanitarian aid disembarked Monday, en route to the blockaded Gaza Strip docked in the Israeli port city of Ashdod. The first aid shipment from Turkey to Gaza anchored in Ashdod on July 3 before Ramadan Bayram, also known as Eid al-Fitr, carrying 11 tons of staple food items including flour, rice and sugar as well as toys and clothes for children.

The ship, which was prepared by the Disaster and Emergency Management Presidency (AFAD), was received at the Ashdod port by Cem Utkan, Turkey's charge d'affaires in Tel Aviv, along with officials from several Turkish charity associations. The 137-meter-long and 23-meter-wide ship named Eclips Majuro, set out for Israel on Friday from Turkey's southern port of Mersin bearing some 2,500 tons of humanitarian aid. Although the first shipment was mostly food, the latest ship carried 300,000 pieces of clothing, 1,000 bicycles bearing the Turkish flag, 100 wheelchairs for the disabled and backpacks and stationary for Gazan children as well as food and medical supplies.

It is expected that the aid will be distributed in Gaza - after being taken by truck from Ashdod - before the upcoming Qurban Bayram (Feast of the Sacrifice) holiday, also known as Eid al-Adha, which will begin on Sept. 12.

The Turkish Red Crescent will also sacrifice animals in Gaza for Qurban Bayram. The meat of the sacrificed animals will be distributed to the hospitals where people who have been injured during the clashes received treatment, orphanages and families who have a hard time living under the Israeli blockade.

Since 2007, the Gaza Strip has suffered a joint Israeli-Egyptian blockade that has deprived the enclave's roughly 1.9 million inhabitants of their most basic needs, especially food, fuel, medicine and construction supplies. The latest influx of Turkish aid into Gaza comes within the context of a deal signed recently between Turkey and Israel in which the two agreed to restore diplomatic relations following a six-year hiatus. Prime Minister Binali Yıldırım said that Tel Aviv had met all of Ankara's preconditions for normalizing ties, which were severed in 2010 after Israeli commandos stormed a Gaza-bound Turkish aid vessel. The attack resulted in the death of nine Turkish activists and left another 30 injured, one of whom succumbed to his injuries nearly four years later. At the time, Turkey demanded that Israel officially apologize for the attack, compensate the families of those killed, and lift its longstanding blockade of the Gaza Strip. In 2013, Israeli Prime Minister Benjamin Netanyahu voiced his regret to then-prime minister (now president) Recep Tayyip Erdoğan over the incident. Under the terms of the agreement to normalize relations, the two countries will exchange ambassadors and Israel will pay $20 million in compensation to the families of the 2010 flotilla attack victims. Israel has also agreed to Turkey's request to maintain a "humanitarian presence" in the blockaded Gaza Strip.

Following the agreement Turkey began to send humanitarian aid led by AFAD and the Turkish Red Crescent to Gaza starting with the aid sent by Lady Leyla on July 3 before the Ramadan Bayram holiday. Following the 11-ton shipment of aid, the Turkish Red Crescent sent more than 60 trucks to Gaza, carrying hundreds of tons of foodstuffs along with the other things that Gazan people need to maintain their everyday lives. Moreover, the Turkish International Cooperation and Development Agency (TİKA) previously unveiled a $13-million project to build 320 housing units in the Gaza Strip for Palestinians whose houses were demolished in the 2014 Israeli military offensive. It is just one of hundreds of TİKA-funded projects, ranging from vocational training for the disabled to water wells in the Gaza Strip. In the West Bank TİKA has also built a hospital and school, and offers humanitarian assistance such as supplying wheelchairs to the disabled. TİKA is known to be very active in Gaza as the development agency previously invested approximately $400 million over the last 10 years for projects in Gaza, the West Bank and Jerusalem, as well as other parts of the Palestinian territories.