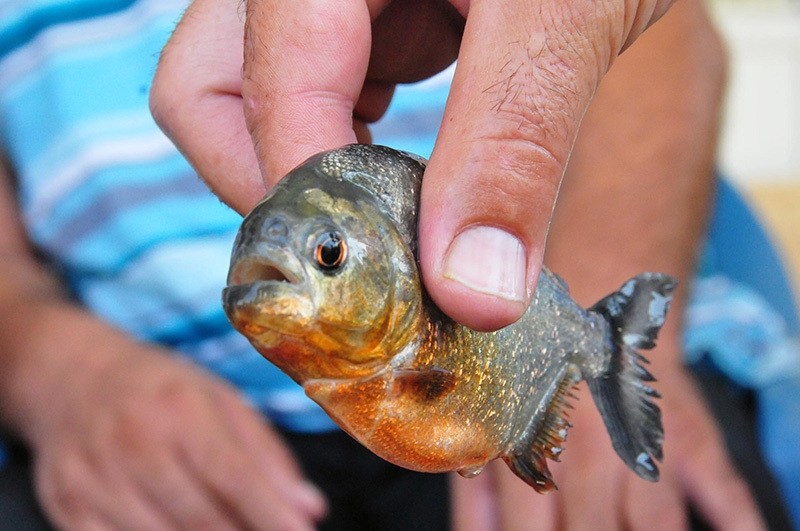 An amateur fisherman was bitten by a piranha near the Seyhan Dam in southern Adana province, causing the second incident related to the omnivorous fish which does not exist naturally in Turkey.

31-year-old Osman Demir had gone fishing in the district of Sarıçam along with three friends. After catching some 20 fish, Demir felt his fishhook was being pulled harshly, and pulled the fish out of the water. As he was trying to pull the fish off of the hook, Demir was bitten on his hand by the piranha, dropping the fish on his foot, receiving another bite.

His friends immediately came to his help and put the fish into a water-filled bucket, and then rushed Demir to hospital. Although Demir had minor wounds, he was given a precautional tetanus vaccine.

The group informed the provincial Food, Agriculture, and Livestock Directorate of the incident. "We did not kill the fish in order for the authorities to examine it. However, upon my own research, I found out that the fish was a red-bellied piranha, which lives in groups. If we were inside the water, the consequences could have been dire. Sometimes kids swim in the dam's lake. People should not release every fish into the lake," Demir said.

Upon hearing that there was a piranha in the neighborhood, locals flocked to see the fish, watching it break even small wooden sticks with its teeth.

Authorities launched an investigation into the incident.

The Seyhan Dam Lake is located just north of Adana, Turkey's sixth most populous city, where locals use every opportunity for swimming (even in irrigation channels despite bans and deaths) as summers are extremely hot.

Recently on Tuesday, a group of amateur fishermen were left bewildered when two piranhas appeared in their nets in the Yeşilırmak River in the central province of Amasya.

The fishermen brought one fish to the provincial Food, Agriculture, and Livestock Directorate to be examined. Technical staff from the Directorate went to the area where the fishermen had captured the fish, which were confirmed to be piranhas indigenous to South American rivers.

A statement released by the Directorate said that the fish were believed to have been released into the river, and urged locals to be cautious when they come across piranhas and not release them back into the river if captured.