Turkish people sorrowful but proud on 36th anniversary of 1980 coup 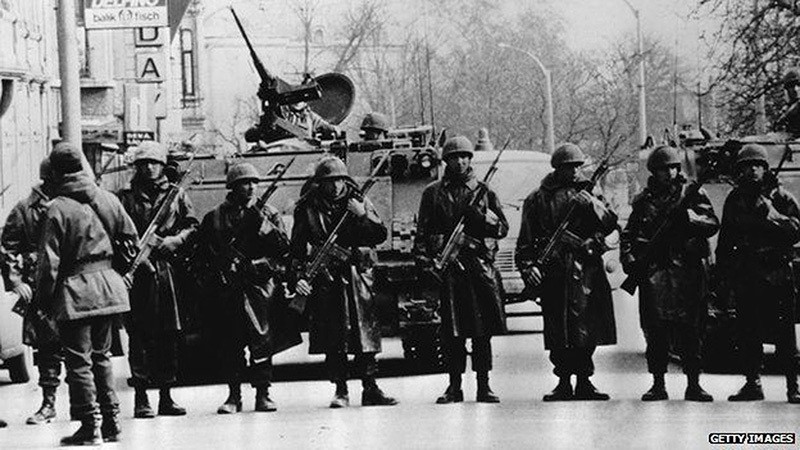 Pains of the 1980 coup still linger on its 36th anniversary, but this time Turkish people were rather proud for defying tanks and jets in the coup attempt launched by the Gülenist Terror Group (FETÖ) on July 15

On the 36 the anniversary of the September 12, 1980 military coup, Turks remembered the pains of the victims of three-year-long military junta, but this time the day was marked with the proud of defying tanks and jets in the coup attempt launched by the Gülenist Terror Group (FETÖ) on July 15.

Coinciding this year with the first day of four-day-long Qurban Bayram (Feast of the Sacrifice), also known as Eid al-Adha, September 12 commemoration events were generally postponed as most people spent time with their families, visiting cemeteries as a bayram tradition or carried out their sacrifice duties.

This year's bayram visits to cemeteries also saw prayers for 240 civilians and security officials who were killed by FETÖ-linked officers for trying to defend democracy on July 15.

After a decade marked with ideological terror stemming from the Cold War, lack of accord between political parties and economic downturn, Turkish Armed Forces carried out a coup attempt within the chain of command on September 12, 1980, unlike the July 15 coup attempt in which the majority of the military and police forces fought bravely against the coup plotters.

The era that began with the coup is known for gross human rights violations, suspension of the political process and tens of thousands being detained and tortured. Several prisons, including one in Diyarbakır, became infamous for the systematic torture of inmates. Diyarbakır Prison is seen by many as the place where the PKK terrorist organization was born.

Some 1.6 million people were blacklisted, 650,000 were detained and 230,000 were tried in courts. More than 500 people were sentenced to death penalty, of which 124 were approved by the Supreme Military Court of Appeals. Fifty people, including juveniles, and most political prisoners, were executed while 300 people died in prisons, mostly from torture.

Hundreds of thousands of people were banned from travelling abroad and 30,000 people fled abroad as political refugees despite all measures. Around 14,000 people had their citizenships revoked, thousands were dismissed from civil service and films, books, newspapers and magazines were censored and all social community groups were closed.

This bloody period also marked the end of death penalty in Turkey, which had become a matter of debate following the July 15 coup attempt. The last execution was carried out in 1984, and since then, death sentence cases were not brought to Parliament for approval, and the sentences were not carried out. Turkey abolished the death penalty in 2004 as part of its long-standing efforts to join the European Union, and approved legally binding international documents to prevent capital punishment.

Even after 36 years passed since the coup, Turkey's response to the coup plotters was minimal, which led to the ongoing effect of the military in politics in the so-called "postmodern" coup of Feb. 28, 1997 targeting conservative Welfare Party, and tensions between the military and the Justice and Development Party (AK Party) government reaching its climax with the "e-memorandum" on April 27, 2007. Following AK Party's election victory on July 22, several attempts were made introduce democratic reforms, however, these reforms and growing public opposition to military interference in politics were manipulated by FETÖ linked prosecutors and police officers in Ergenekon and Sledgehammer trials. These cases launched through illegal or fake evidence - now widely accepted as schemes targeting the traditional Kemalist line within the military and suppressing several political opposition groups - led FETÖ to greatly increase its influence and fill the cadres of bureaucracy, police and military. The results were the December 17 and 25 operations in 2013 targeting government officials through corruption charges, and when these efforts failed with an ensuing crackdown on the shadowy movement, the July 15 coup attempt was launched by FETÖ in a bid to seize power.

In 2010, on the 30th anniversary of Evren's takeover, the public voted in a referendum on a series of amendments to the Constitution, including lifting the coup leaders' immunity from prosecution. Human rights activists rushed to petition courts for Evren's prosecution the following day.

The trial against Evren and Şahinkaya, only surviving members of the MGK, began in April 2012. Both men were too ill to attend but gave brief statements to the court through a video link system from their hospital beds. They were sentenced to life imprisonment and stripped of their ranks with a court decision in 2014. Both Evren and Şahinkaya died in 2015 as the appeal process was ongoing, leading to the cancellation of the cases with their verdicts not being applied.
Last Update: Sep 12, 2016 5:19 pm
RELATED TOPICS