Restoration of 2,200-year-old ancient Laodicea theater in Turkey to be completed in 3 years 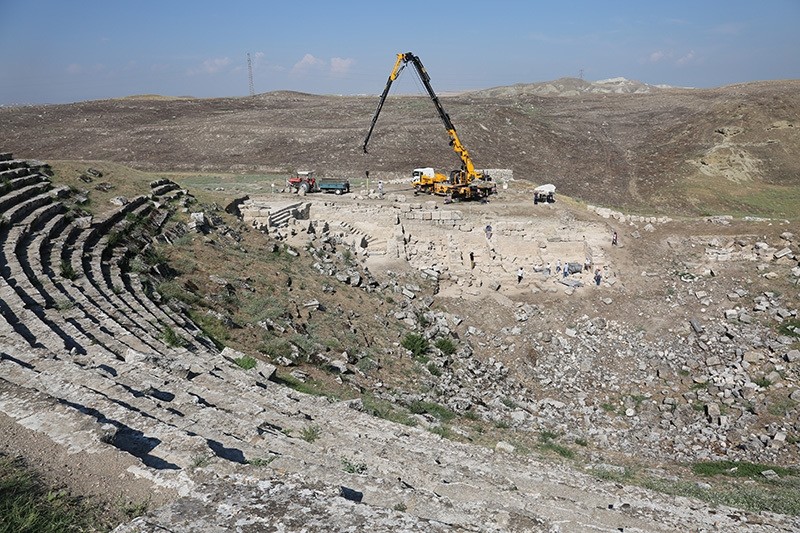 The restoration and excavation work of a 2,200-year-old theater located in the ancient city of Laodicea in Turkey's southwestern Denizli province is expected to be completed within three years, an archeologist leading the restoration works said on Saturday.

The Chair of Pamukkale University Archeology Department and the Head of Laodicea Excavation Committee Professor Celal Şimşek said that the ongoing work at the ancient city currently focuses on two crucial findings, including a temple and the theater.

"Laodicea was a great metropolis and had two ancient theaters," Şimşek said and added that they are currently working on the restoration of the western (Hellenistic) theater and aim to complete it in three years.

Şimşek noted that the restoration of the ancient city has been carried out in cooperation with the Ministry of Culture and Tourism and Pamukkale University since 2003 and with the contribution of the Denizli Metropolitan Municipality, they were able to continuously carry out excavations for twelve months.

Şimşek said that the inscriptions found in the northern theater reveals that people held important trade meetings in the establishment, which could hold up to 20,000 people.

"This shows us that an entity similar to the European Union existed in this land 1,800 years ago," Şimşek said.

He also noted that the 35,000 square meter temple was destroyed during the period of Constantine the Great and it was used as a market square instead. The remains of the temple and the market square were then buried following an earthquake in the fifth century AD.

Şimşek and his team aim to add Laodicea to the UNESCO World Heritage List in five years.

Laodiciea is currently on the tentative list of the UNESCO World Heritage Sites in Turkey.​