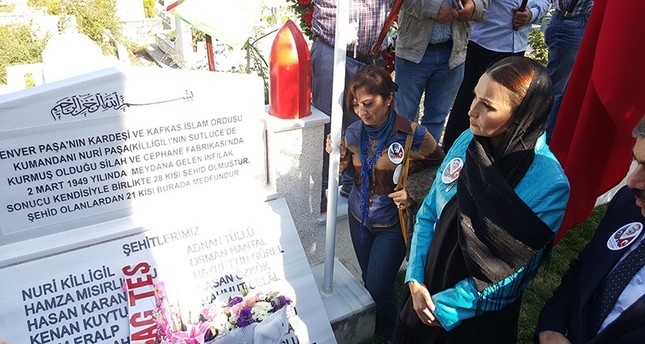 A ceremony for Turkish war hero Nuri Killigil was held on Wednesday at Edirnekapı Martyrs Cemetery in Istanbul. Killigil, more commonly known as Nuri Pasha, was the brother of former War Minister Enver Pasha and a prominent Ottoman soldier.

Funeral rites were performed after a hiatus of 67 years in the presence of Killigil's family, Azerbaijani MP Ganire Paşayeva and officials from Istanbul Metropolitan Municipality.

Killigil was active in the Teşkilat-I Mahsusa (Ottoman secret service) in Italian-occupied Libya during World War One in an effort to disrupt allied movements in the region. Following the Ottoman defeat, Killigil took to the Caucasus and formed the semi-military unit known as the Army of Islam. This unit fought on behalf of local Muslim, Turkish and Azeri groups in the region, liberating Baku from Soviet-Tashnak and later British occupation. Eventually he fell captive to British forces but was freed during a daring raid by his colleagues.

In 1949, he died in an explosion along with twenty-eight others at a munitions factory in Istanbul's Sütlüce district. His body was retrieved from the Golden Horn after a period of ten days. But a ruling made by a leading cleric at the time, stipulating that funeral services could not be performed for dismembered bodies, meant that Killigil was buried in the absence of traditional Islamic funeral rituals.

But the recent publication of a biography by researcher Atilla Oral had prompted efforts to have his grave restored and for funeral rites to finally be performed.

Share on Facebook Share on Twitter
Previous in Turkey Five people were killed and 22 others went missing after a boat carrying... Next in Turkey Menus in Turkey are often ridded with hilarious mistranslations. Social...
DAILY SABAH RECOMMENDS