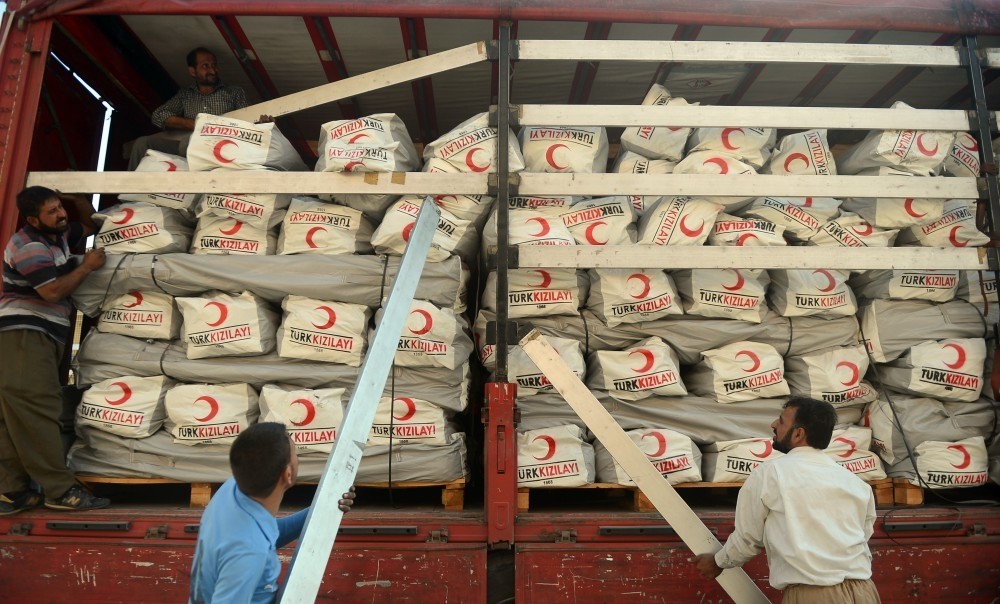 Workers unload aid boxes in Irbil, Iraq. Turkey dispatched 20 trucks of aid for the displaced in the country.
by Daily Sabah with AFP Oct 26, 2016 12:00 am

Trucks carrying some 527 tons of humanitarian aid Turkey dispatched to Iraq arrived in the city of Irbil yesterday amid expectation of a large influx of displaced people from Mosul, which security forces are trying to retake from Daesh

Turkish trucks carrying tons of humanitarian aid arrived in Northern Iraq's Irbil Tuesday as the region prepares to take in Iraqis displaced by Daesh amid efforts by Kurdish peshmergas and Baghdad's armed forces to recapture the terrorist group's stronghold in Mosul. "Mosul is your home too," a campaign organized by the Turkish Red Crescent and Disaster and Emergency Management Authority (AFAD), saw the delivery of 527 tons of humanitarian aid by trucks that set off from the Turkish capital Ankara last week.

The aid will be stored in warehouses designated to store needs of the displaced who will be settled in a tent camp in Irbil.

Speaking at a press conference with Irbil governor, Mehmet Akif İnam, Turkey's consul-general in this city, which is the seat of Iraqi Kurdish Regional Government (KRG), said the aid was "a natural result of friendship and neighborliness between Turkey and Iraq." "Turkey sent the aid as soon as people started fleeing from Mosul to Irbil and this aid today is only part of an aid campaign for the displaced in Iraq since 2014," he said.

Officials believe the ongoing military operation in Mosul supported by Turkey will impact the lives of some 2 million people in the city that have been under Daesh rule for more than two years as residents run for their lives in fear of collateral damage and being used as human shields by the terrorist group. Turkey has dispatched a humanitarian delegation to the region north of Mosul earlier to assess the situation and provide on-site aid to the displaced.

Primary humanitarian needs are food, accommodation and clothes for the internally displaced who left their residences with few possessions. The humanitarian aid Turkey sent consists of food for 10,000 people and clothes for 35,000 others and is destined to be delivered to about 30 villages liberated near Mosul. Turkey expects a wave of up to 400,000 people if the current pace of the offensive to retake Mosul is maintained. Turkish authorities said they planned to expand two camps set up earlier for the displaced in Iraq for 20,000 people and are establishing a new camp capable of housing 100,000 people if the situation worsens.

Although it supported military training of security personnel in Iraq for anti-terror operations, Ankara has drawn the ire of Baghdad's government including some Shiite groups that opposed Turkish presence in Iraq while embracing the international coalition assisting the operations in Mosul.

Charities have launched an aid campaign titled "Mosul is your home too" in preparation for the wave of those displaced. The Turkish Red Crescent leads the aid efforts for the city, a former Ottoman territory and home to an ethnic Turkmen community.

Mehmet Akif İnam said Turkey's humanitarian efforts also aimed to relieve the burden of the displaced on the Kurdish Regional Government (KRG) administration already coping with a wave of displaced from several cities that Daesh threatens.

Turkey considers setting up a "terror-free safe zone" in Northern Iraq, like in Syria.

"It's only rational to establish a safe zone within the region controlled by the KRG," Prime Minister Binali Yıldırım said over the weekend. "We already have border units situated in Hakkari and Şırnak, near the Iraqi border," Yıldırım added.

The U.N. refugee agency is preparing to receive 150,000 Iraqis fleeing the fighting around the Islamic State group-held city of Mosul within the next few days, its chief said on Monday.

"The preparations are proceeding well... UNHCR is going to have in two or three days 30,000 tents in Iraq, enough for 150,000 people," Filippo Grandi told reporters in Jordan after visiting Iraq.

Sides in Mosul are now fighting in sparsely populated areas, but when they near the limits of the city itself aid groups fear the start of a major exodus.

A million people could be displaced, sparking an unprecedented humanitarian emergency in a country where the UNHCR says more than three million people have already been forced from their homes since the start of 2014, including a third in the region controlled by the KRG.

Grandi said a key issue was "to find enough sites to be able to receive this huge mass of people should it come out of Mosul."

"Negotiations in this respect are going on with the government of Iraq and with the Kurdish regional government," he said.

So far, "the outflow of displaced people is not yet from the city of Mosul but from the outskirts" where there has been fighting, Grandi said.
RELATED TOPICS