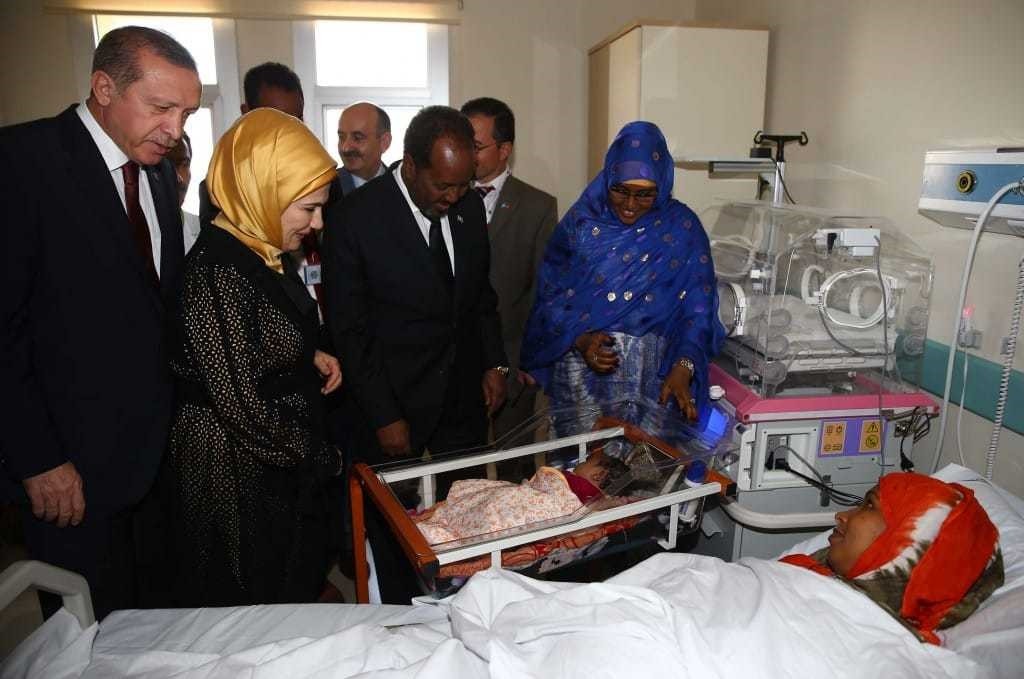 President Erdou011fan and his wife visit a Tu0130KA-built hospital in Somalia in 2015. The agency builds hospitals all across the world from Somalia to the West Bank in the Palestinian territories.
by Safure Cantürk Nov 01, 2016 12:00 am

From full-fledged hospitals to the training of doctors, Turkey's development agency TİKA reaches out to countries in need of health services. The agency boasts 196 projects completed in one year in more than 50 countries

Turkish Cooperation and Development Agency (TİKA) has reached out to far corners of the globe with health projects. Apart from building modern hospitals in hundreds of countries, the state-run agency helps those in need of health services, from meeting patients with doctors sometimes for bone marrow transplants and sometimes, for aesthetic surgery to cover burns.

In 2016 alone, TİKA accomplished 196 health-related projects in more than 50 countries. Combating the Ebola epidemic in Africa was the highlight of TİKA's health services that also provided access to health services for hundreds of thousands in conflict, disaster zones and in impoverished communities.

TİKA President Serdar Çam said their health projects across the world aims to draw the attention of the international community to the plight of people affected by humanitarian crises, poverty, etc. "We both build hospitals in places like Palestine, Afghanistan, Somalia, Sudan, Pakistan and train healthcare staff," he said. In the Central Asian country of Kyrgyzstan, TİKA's ambitious project entitled "Kyrgyz-Turkish Friendship Hospital" is under construction. The hospital will serve some 150,000 patients yearly and will be one of the largest hospitals in the country. In Uzbekistan, another Central Asian country, TİKA built the first bone marrow transplant center in the capital Tashkent. The center will be staffed entirely by local doctors and healthcare workers trained in Turkey and will be a culmination of a campaign to increase bone marrow transplants in the country where the first bone marrow transplant was performed by Turkish and Uzbek doctors in 2014.

In the Western African country of Niger, one of the poorest countries in the world where insufficient resources hinder quality healthcare, TİKA built a maternal health and rehabilitation center. The center primarily offers health services for thousands of women who gave birth in unhealthy environments and at young ages.

A hospital in the Gaza Strip is among TİKA's landmark projects. Health services were largely crippled in Gaza which suffers from an Israeli blockade and was subject to a series of Israeli offensives in the past. The 200-bed Gaza Turkish Friendship Hospital is currently under construction while TİKA also built a rehabilitation center for those injured in the Israeli offensives. A hospital was also built on the West Bank by the Turkish agency.

In Pakistan's Punjab, the agency built a hospital in 2014 that has served more than 10,000 patients since it opened.

In Mogadishu, Somalia, TİKA constructed the largest hospital in East Africa staffed with 90 Turkish doctors. TİKA also built one of the region's most well-equipped hospitals in Sudan's Nyala. In Chad, the agency provides health education for parents and for first aid.

Previously a little-known state apparatus founded with the purpose of helping former Soviet republics after the collapse of the Soviet Union, the agency has re-branded itself in the past decade as a major source for Turkey's international clout by reaching out to people in need across the globe.
RELATED TOPICS