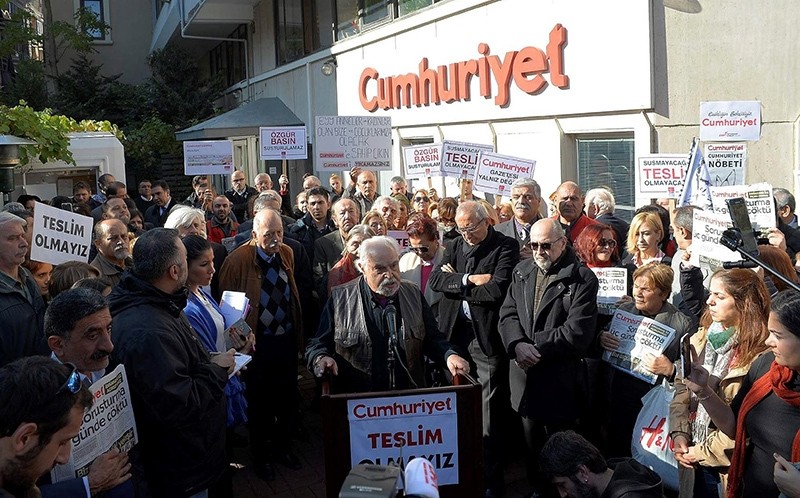 The brother of prominent journalist Uğur Mumcu, who was assassinated near his house in Ankara by unidentified perpetrators, said that his brother would fight against the influence of Gülenist terror group (FETÖ) in Cumhuriyet daily, which recently faced scrutiny for its ties.

Ceyhan Mumcu, the elder brother of late Uğur Mumcu, harshly criticized FETÖ's relations with Cumhuriyet, noting that the daily started to get close to FETÖ during the Ergenekon case.

"My brother would have fought against them if he was alive" Mumcu told a Turkish daily and continued by saying that he stopped reading the daily after Gülenists took over it.

He said that Uğur Mumcu would oppose relations with FETÖ, which is accused of carrying out a bloody coup attempt on July 15.

"It deeply worries us that Cumhuriyet is mentioned alongside FETÖ and PKK" Mumcu said and added that the attitude of the daily during Ergenekon trials shocked him.

He continued by saying that the daily adopted a 'disgraceful' policy during the Ergenekon trials and acted like they were collaborating with Ergenekon prosecutor Zekeriya Öz, who is affiliated with FETÖ.

"Cumhuriyet is a daily which was established based on the instructions of Mustafa Kemal Atatürk, and defends his values and the Republic" Mumcu said and noted that the daily's policy has dramatically changed over the years.

Referring to Gülenist columnist Nazlı Ilıcak's statements regarding Cumhuriyet, Mumcu said that he stopped reading the daily after she said 'From now on I too will read Cumhuriyet and we embrace it as our own.'

Uğur Mumcu started writing columns for center-left Cumhuriyet daily in 1975, which he continued to write until his death. He mainly focused on Counter-Guerrilla and foreign intelligence activities in Turkey, writing leading reports between their links to terrorist organizations to the extent that almost all major terrorist groups and leading intelligence service were blamed following his assassination. Although several court decisions in early 2000s sentenced different perpetrators for the assassination, instigators behind the assassination were never truly uncovered.

Mumcu's assassination is among "unidentified murders" of early 1990's, in which dozens of journalists, academicians, bureaucrats and businessmen were killed within the turbulent Turkish political spectrum driven by PKK terror, rising extremist movements and increasing military pressure on politics.

Turkish police launched an operation on the Cumhuriyet newspaper over terror support charges on Monday as the paper's editor-in-chief Murat Sabuncu was detained.

Arrest warrants were issued for 17 other executives and journalists from the daily, including executive board chairman Akın Atalay, and authorities said he left for Germany one day before the operation. The paper's head of accounting Günseli Özaltay is also being sought.

The government accuses the FETÖ leader, Fetullah Gülen, of being the mastermind behind the coup attempt and a long-running campaign to overthrow the state through the infiltration of Turkish institutions, particularly the military, police, and judiciary, forming what is commonly known as the "parallel state."

Gülen has been living in the U.S. state of Pennsylvania since 1999.

Turkey is currently under a state of emergency following the defeated coup and had the order extended for three more months from Oct. 19 on. The post-coup probes saw thousands of public employees discharged and dozens of businesses and media instutions linked to the FETÖ were shut down or appointed with state administrators.