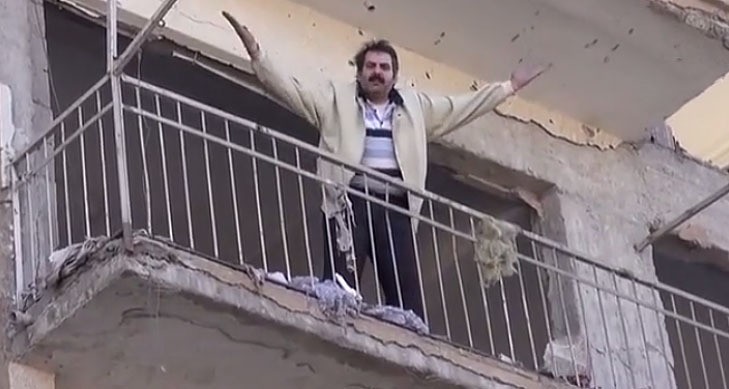 Diyarbakır man lashes out on PKK after his home wrecked in car bombinghttps://t.co/N6p1bNnULb pic.twitter.com/I4mvPNpf43

A man from southeastern city of Diyarbakır revolted against the PKK after his house was wrecked during the latest PKK attack that killed 11 people and injured over 100 others.

The man stepped on his balcony of his flat that suffered extensive damage and shouted: "Record this disgrace, record it. What the hell is this?! They destroyed our homes, they took our lives… What do you want more? Enough is enough!"

The man's outcry was the latest reaction from locals in Turkey's southeast that suffer the most from PKK's terrorist attacks killing civilians along with security forces, in addition to disrupting social life and economy.

PKK's latest attack was carried out in Bağlar district of predominantly Kurdish city of Diyarbakır last Friday, killing 11 and injuring more than 100 people in the car bombing during morning rush hour. Most casualties of the attack were civilians.

The attack, which was later undertaken by hardline PKK splinter group Kurdistan Freedom Hawks (TAK), took place shortly after pro-PKK Peoples' Democratic Party (HDP) deputies, including co-chairs Selahattin Demirtaş and Figen Yüksekdağ, were detained for refusing to bear testimony under the scope of an ongoing terrorism probe. Using a different strategy than the past starting from fall of 2015 and using the locals as shield in urban areas, PKK have received increasing reactions in latest terror campaign that brought life in entire towns and cities in the southeast to a halt due to barricades, ditches and explosive traps.