Hunter finds wounded deer in the woods, carries 3 km on his shoulders for treatment 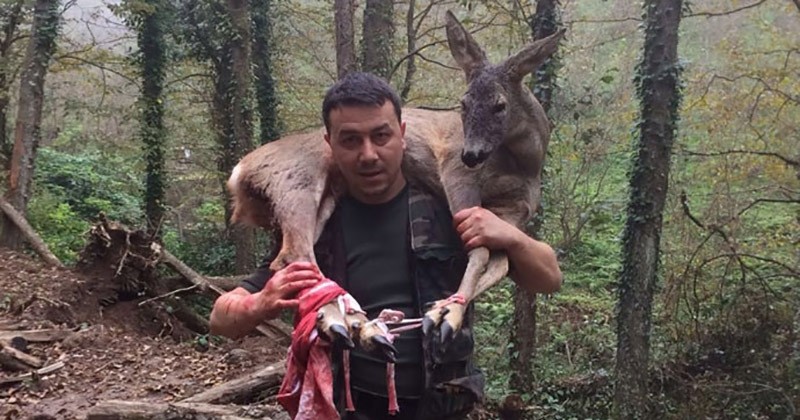 Hunter seen carrying the injured deer on his shoulders after discovering the animal unable to walk (Photo IHA)
by Daily Sabah Nov 08, 2016 12:00 am

A bird hunter in northern Turkey carried a wounded roe deer he found in the woods on his shoulders for three kilometers to save its life.

The holiday season is already in full effect for Volkan Bal, who was hunting for birds with his friends in the Perşembe district of Ordu province when he heard the sound of a deer.

Intrigued by the endangered big game, Bal and his friends began tracking the animal to try and catch a glimpse.

To his surprise they found a roe deer with a wounded leg, lying in blood next to its baby. Bal stopped the bleeding with the help of his friends and carried the roe deer on his shoulders for about three kilometers.

He then delivered it to authorities of the local Directorate of Nature Conservation and National Parks where the roe deer immediately received medical treatment.

Bal, who is a member of the Ordu Hunters and Shooters Association, stated that real hunters should always protect endangered animals or animals with a hunting ban.

"The deer we found had most probably jumped off a high wire and injured its legs heavily. It also had some wounds on its head. We did our best to save the animal," Bal said.