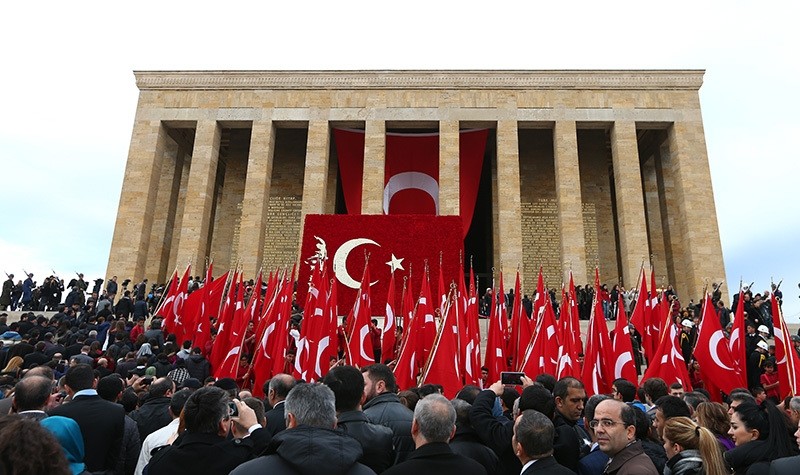 Mustafa Kemal Atatürk, the founder of modern Republic of Turkey, was commemorated Thursday on the 78th anniversary of his death in ceremonies and events.

As is the annual tradition, daily life stopped as sirens wailed throughout the country at 9:05 a.m., the time he passed away in 1938, and people observed two minutes of silence.

Thousands of people flocked to the mausoleum of Atatürk in Ankara to commemorate the founding father of the Republic of Turkey.

Erdoğan signed the official Anitkabir memorial book at the Misak-ı Milli (National Pact) Tower and wrote: "We will not let terror organizations, gangs of betrayal and dark circles using these as a tool to disrupt our peace, stability and brotherhood of 1,000 years, withhold our country from reaching its goals."

"The honored veteran Mustafa Kemal is one of the shared values of this country and our nation. Unfortunately, for many years certain circles have claimed him and made him a tool for their own marginal ideologies and the vicious cycles of their daily political arguments. However, owning the memory of Atatürk requires owning our independence, our homeland, our flag, our republic, and our country's millennial heritage of civilization with the spirit of the War of Independence," Erdoğan said in a statement released on Nov. 10 by his office.

He added, "Turkey has proved this by adopting extensive reforms as well as the policies making the state embrace the nation."

Prime Minister Yıldırım said that today the Republic of Turkey, which Atatürk called his "greatest work," is a country whose friendship is sought and which plays an active role in resolving international problems.

"Our government exerts maximum effort to strengthen our republic and democracy," Yıldırım said in his message.

In his message, Chief of General Staff Akar also said: "As members of the Turkish Armed Forces, we follow in Atatürk's footsteps and we are at the service of the Turkish nation with devotion to our nation and country, respectable power, and superior discipline."

The commemoration ceremonies are taking place across the country, but the center of attraction is the grand mausoleum complex that also houses a museum.

For the first time, a commemoration ceremony was also held in Beştepe Presidential Complex in Ankara.

Atatürk was born in 1881 in Thessaloniki in what was then the Ottoman Empire. He made his mark in the military in 1915 when he led forces to repel the allied invasion in Çanakkale, known in the West as the Dardanelles.

Following the collapse of the Ottoman Empire after the First World War, Atatürk led the Turkish War of Independence, which defeated European powers. When he became president, Atatürk transformed the former empire into a modern and secular country.