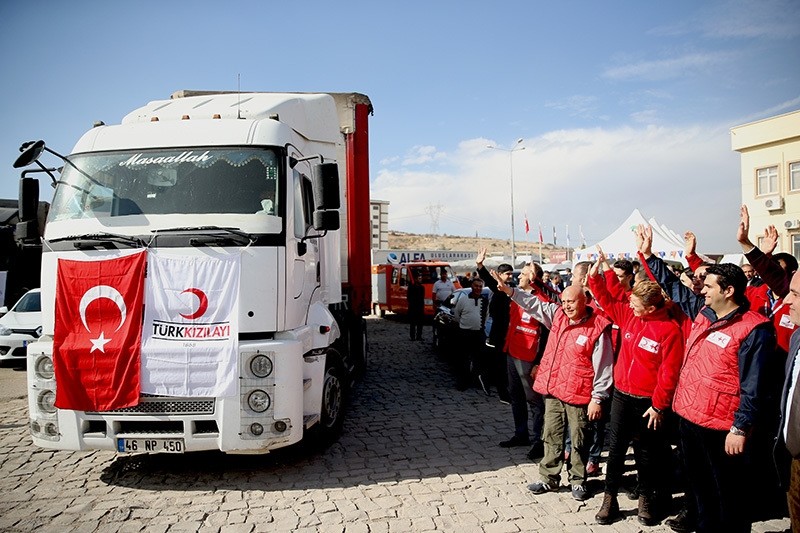 The Turkish Red Crescent is boosting its humanitarian aid to Jarablus in Syria and northern Iraq and has so far sent about 450 supply trucks to Mosul, in areas wrecked by ongoing or recent conflict, the group's head Kerem Kınık told Anadolu Agency yesterday.

The Turkish Red Crescent is extending a helping hand not only to refugees living in Turkey, but also to potential refugees in crisis-hit regions, Kinik said. Stating that Syria and Iraq are two key regions of migration, Kınık said that they are also working to stem new waves of refugees.

"We boosted humanitarian aid to Jarablus after Operation Euphrates Shield started [on Aug. 24] and in northern Iraq after the Mosul operation started. We have multidimensional humanitarian aid such as establishing new refugee camps in these areas [Mosul], creating a peaceful environment in Jarablus, and providing support for the people of Jarablus to enable resettlement there," Kınık added. Turkey's Operation Euphrates Shield began in late August to rid Syria's northern border area of terrorists, in particular Daesh.

Kınık said the Turkish Red Crescent has sent nearly 450 trucks of humanitarian aid to Mosul and added: "With AFAD [Turkey's Disaster and Emergency Management Authority], we have two camps with a 20,000-person capacity. We are increasing their capacity. We have been trying to provide almost 6.5 million displaced people inside Syria with 20 trucks of humanitarian aid daily, but the crisis is big and this aid isn't enough." Kinik said the aid sometimes stops when convoys are targeted, ceasefires are violated and Syria grows more unsafe.

Kınık also touted the new Kızılay charity debit card, which uses the Red Crescent's Turkish name, and has so far provided nearly 300,000 Syrians with TL 450 million. Calling on people in Turkey and abroad to help further, Kinik said they can donate TL 10 to the "Mosul is your home" campaign by sending an SMS to 2868.
Last Update: Nov 15, 2016 4:15 pm
RELATED TOPICS