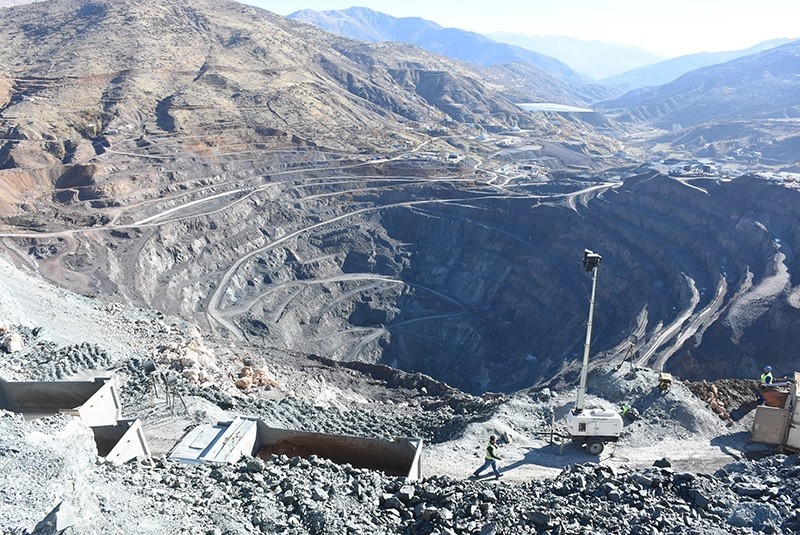 Search and rescue crews are trying to reach 10 workers trapped in a copper mine in southeastern Turkey days after a landslide buried the mine, killing six miners. As families awaited news from their loved ones at the private-run mine in the province of Siirt, Energy and Natural Resources Minister Berat Albayrak comforted them and assured meticulous, around-the-clock work was underway at the site to recover the workers.

The open-pit mine in the district of Şirvan collapsed after a landslide believed to be triggered by heavy rains struck it late Thursday. Five bodies have been recovered from under the tons of soil since Thursday and Sedat Bulut became the sixth victim after his corpse was discovered after excavation efforts. Authorities arrested Mehmet Oğuz, the operating manager of the mine run by Park Elektrik, a company of Ciner business conglomerate, on charges of negligence relating to work safety. Five others from the company and its subcontractor Antlar İnşaat, who were detained on similar charges, were released while an occupational safety specialist accused in the investigation remains at large. Authorities have pledged for a comprehensive probe into the incident, the latest in the country that has seen the worst mining disaster in its history in 2014 killing 301 workers in western Turkey.

Berat Albayrak, who was on an official visit abroad when the incident happened, visited the site on Saturday and met with the relatives of victims. Speaking at a press conference, Albayrak said the state mobilized the "latest technological equipment at its disposal" to recover the trapped miners. He said all relevant state agencies able to work for rescue were dispatched to the site. "We brought equipment from all over Turkey that could help in search and rescue efforts and mobilized experienced staff to rescue the miners," he said. Albayrak pointed out that a landslide risk was still present at the site and crews were working on "sensitive" ground. "Since the tragic incident, landslides still continue and crews work in a dangerous area. They have a balanced approach to finding our citizens there and retrieve them safe and sound while keeping an eye on a new landslide. We have to be careful both on the speed and time to reach them while maintaining work safety (of rescue crews)," he said.

Albayrak also visited the houses of two miners whose bodies were recovered from the mine and held talks with the families of other miners. "I expressed to them my condolences and explained how we are mobilized since the incident happened," he said. The minister underlined that the crews, including engineers experienced in mining operations, were working around the clock and assured the public they would recover the miners.

The minister said the apparent cause of the incident was heavy rainfall but they needed to focus on search and rescue first rather than delving into the cause. "At this point, we have assessed that two weeks of heavy rainfall in the region, including the night before the incident, triggered a natural disaster. Still, I would like to emphasize that we will look into all angles, from an engineering point of view, with regard to infrastructure and nothing will be overlooked," he said.

Yesterday, crews managed to reach bulldozers and other heavy machinery buried under the soil while a large number of ambulances were readied at the site, fueling hope among families of miners who braved the cold since Thursday, desperately waiting on a barren stretch of land overlooking the mine's entrance below.

Madenköy, where the copper mine is located, is one of the most important copper reserves in Turkey and was first excavated in 1969 by the state-run mining authority. It was handed over to the private sector in 2003 and Park Elektrik bought the mine in 2004. The company extracted some 10 million tons of copper ore as of the end of May this year from the mine.

This is not the first incident in a mine run by Ciner companies. Between Feb. 6 and Feb. 10 in 2011, two mines run by Ciner in southern Turkey collapsed. One miner was killed in the first collapse while only one body out of 10 workers trapped was recovered from the mine. The incidents were blamed on "slope failure."

Turkey, rich in coal mines especially in the west and the north, saw the worst mining disaster in its history in May 2014. A total of 301 workers were killed after they were trapped in the Soma coal mine in the eponymous town in western Turkey that caught fire. Five months later, another coal mine in the central town of Ermenek became flooded and 18 miners were killed. The owners and managers of both mines face life sentences for negligence in both cases. Although Turkey has strict regulations regarding the work safety of the mining sector in place, the fatalities are blamed on private-run mines ignoring expensive safety measures for the sake of higher revenues.

The country stepped up measures for work safety further following the disaster in Soma and enacted a set of regulations improving work conditions and pay for miners. Some 100 mines were closed after increased inspections by authorities in the wake of the May 2014 incident for failure of ensuring work safety.