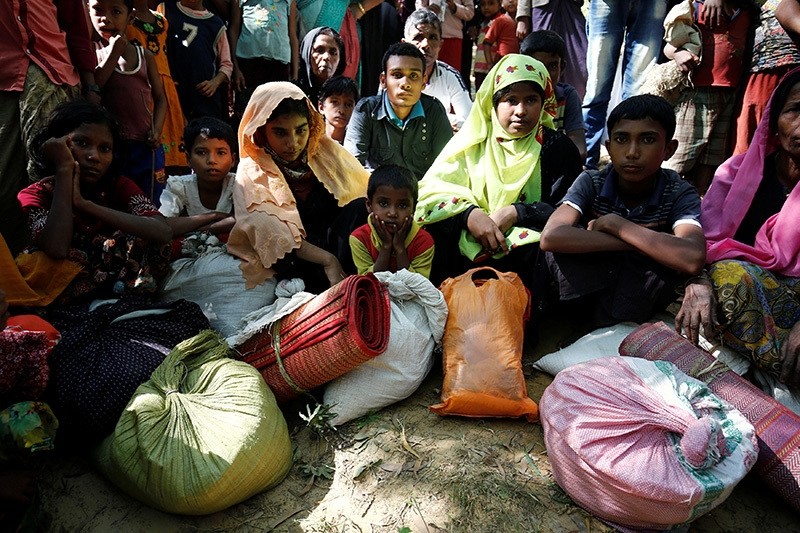 The head of Turkey's Religious Affairs Directorate (Diyanet) has called for a focus on Rohingya Muslims in Myanmar, saying their plight must not be overshadowed by the suffering of Muslims in other parts of the world such as Syria.

Prof. Dr. Mehmet Görmez made the remarks during his meeting with the head of Arakan Rohingya Union Dr. Wakar Uddin in Ankara on Tuesday.

"Behind the smoke in [the Syrian city of] Aleppo near us, [the suffering of] Rohingya [in Myanmar] is not seen. As fires rage across the capitals of many Islamic countries, Muslims only see the smoke of that fire [in Syria]," Gormez said.

"But they are neglecting Rohingya, Myanmar and Arakan [the old name for the Rakhine State], where there are bigger sufferings.

"Because of this negligence, the state in Myanmar and Burma is increasing its pressure on Muslims," he said.

Görmez added Turkey's Religious Affairs Directorate and Religious Foundation was continuing to do its best for Muslims in Myanmar.

He said it was the duty of the whole world to end the oppression of the Rohingya and urged the Organization of Islamic Cooperation (OIC) to tackle this issue as its primary duty.

Founded in 1969, the 57-member strong OIC is an international organization working to protect the interests of the Muslim world in the spirit of promoting international peace and harmony.

On a different note, Görmez said humanitarian aid was given to 16,000 Muslims in the Rakhine State during the last Ramadan; 11,000 animals were also sacrificed for them during Eid al-Adha.

Wakar Uddin thanked Turkey for all its help for the Rohingya.

"Thank you for accepting us. Thank you Turkey as this country helped Rohingya Muslims the most. We feel honored about this. We are getting strength from you," he said.

Rohingya have been fleeing Myanmar in droves since mid-2012 after communal violence broke out in Rakhine between ethnic Rakhine Buddhists and Rohingya -- described by the United Nations as among the most persecuted minority groups worldwide.

The violence left around 57 Muslims and 31 Buddhists dead, some 100,000 people displaced in camps and more than 2,500 houses razed -- most of which belonged to Rohingya.