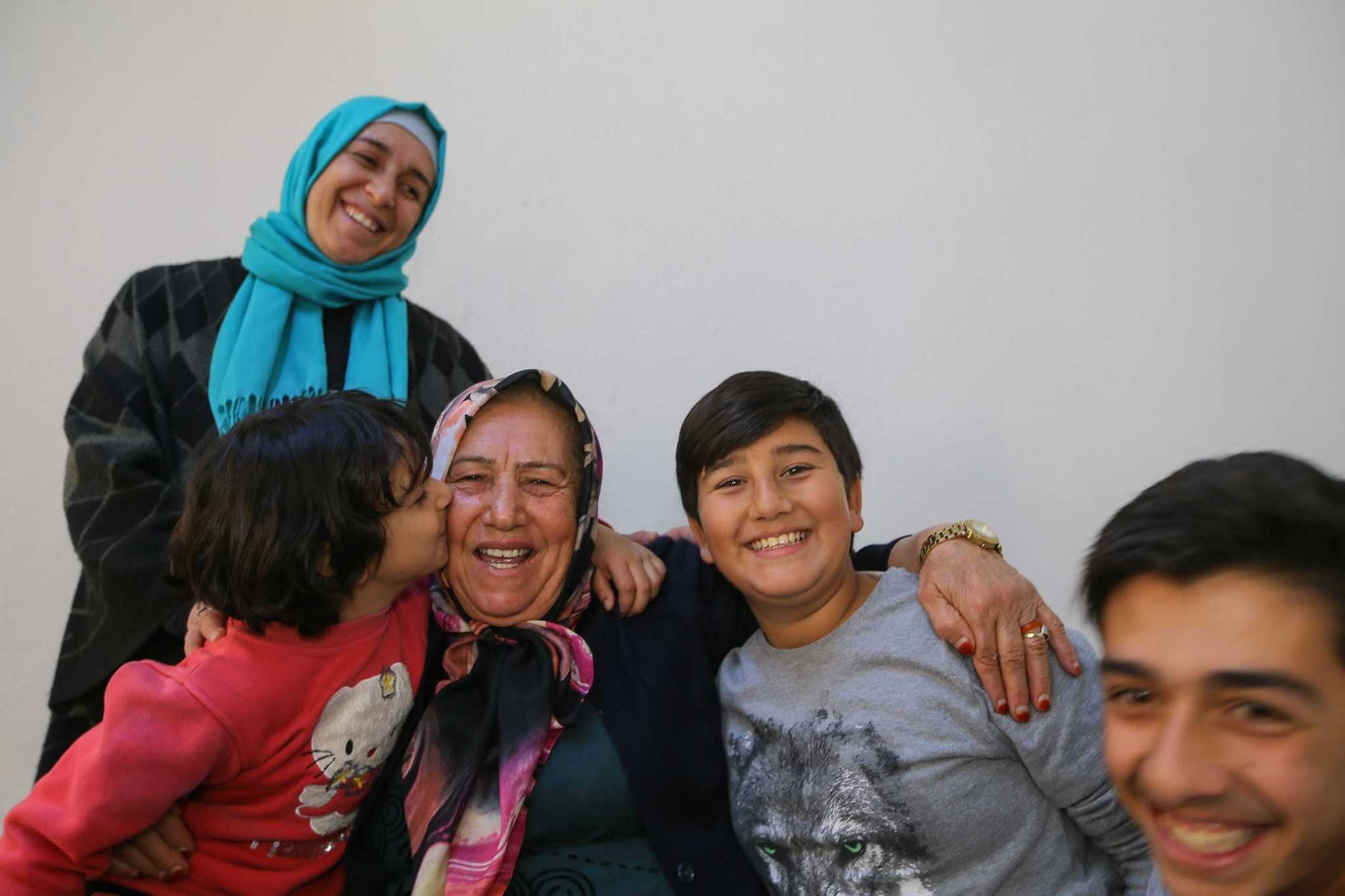 Children of the Syrian family embrace and kiss Nabiha Acar who has helped them since they settled in u0130zmir.
by Daily Sabah with AA Nov 23, 2016 12:00 am
In the fifth year of the civil war, Syrians who had fled to neighboring Turkey are struggling to make ends meet. For the well-being of nearly 3 million refugees, Turkey has funneled millions of dollars in funding towards their care, much more than any other country. However, Turkey has had difficulty offering accommodation for all the refugees with its limited resources. This is where a countless number of generous Turkish citizens have stepped in. Nebiha Acar, 70, is one of those thoughtful people who has shared what she has with her country's "guests."

Acar, who resides in a poor neighborhood in the western city of İzmir, lives on a low monthly benefit she was entitled to after the death of her husband.

Yet, this did not stop her from extending a helping hand to the Hashemis, a family of five living across the street, who praise her as their hero and impromptu "mother." The Hashemi family is from Syria's Hasakah, a city contested by the terrorist group Daesh and Syrian-Kurdish militants tied to the PKK terrorist group that has been attacking Turkey.

Fearing for their lives amid the severe clashes between factions, Ammar Hashemi, an engineer, and his wife Fadela Abed, left for Turkey with their children Obedallah, 14, Muhammad, 12, and Sara, 7.

After crossing the border, they traveled for hundreds of kilometers arriving in Izmir, similar to hundreds of other refugees who hope to illegally cross into Europe via the Greek islands, situated a few miles from the shores of Izmir.

After giving all their money to human smugglers who defrauded them and left them with no place to go, the family took shelter in an abandoned building on the street where Nabiha Acar lives a few weeks ago. It was a cold night when the Hashemis, with very few possessions, took refuge in the house.

"I saw them entering the house and I felt like I should do something for them. I couldn't sleep because I was thinking about their situation, but I was too shy to offer them help. Finally, I decided to knock on their door. When they opened the door, I saw they had no place to sleep, not a single bed. I then gave them a bed and bed sheets," she recalls.

The next day, she called her daughter and her daughter-in-law asking them to give some furniture for the family. What followed was the start of a friendship, which Acar says resembles a "long-lost family."

"I cook meals for them. It is not a burden for me. Even if I were rich, I wouldn't be happy unless I could help others. Now, their children visit me and this has been the most beautiful thing that has happened to me in a long time. I treat them like my own children and I want their children to play in the street without thinking about their problems," Acar said.Fadela Abed, who was a teacher back home, says she was unhappy to be in Turkey, far from their loved ones in Syria, but Nabiha put a smile back on their faces.

"We thank God for meeting such a kind woman. She is like a mother to us. Our lives changed once she started helping us," she says.
Last Update: Nov 24, 2016 2:42 pm
RELATED TOPICS