Turks in Austria concerned over far-right victory in polls 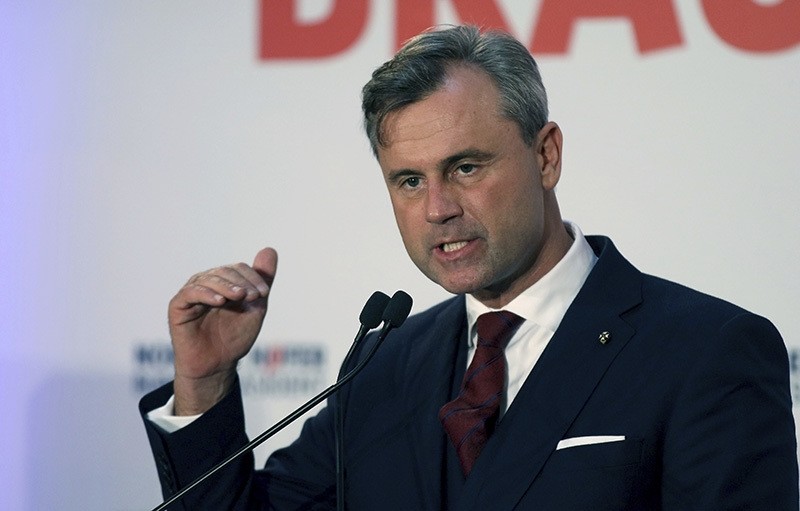 Norbert Hofer of Austria's Freedom Party, FPOE, delivers a speech during the final election campaign event in Vienna, Austria, Friday, Dec. 2, 2016 (AP Photo)
by Anadolu Agency Dec 03, 2016 12:00 am
Ahead of Sunday's presidential election rerun, Austrian Turks spoke out about their concerns in a poll that could see the far-right Freedom Party's candidate elected head of state.

Although the presidency is a largely symbolic role in Austria, the Freedom Party's potential success is seen as an indicator of anti-migrant sentiment and disillusionment with mainstream politics.

Hofer, who advocates a ban on religious coverings in public, is widely known for his remarks critical of immigration and Turkey.

He has said that if Turkey joined the EU then he would, as president, support Austria's exit from the bloc.

While some Turks living in Austria have said they would never support far-right parties, others say they would not vote for the Greens, who they say support "terrorists and coup-plotters" -- a reference to the PKK and the July 15 coup attempt.

The PKK -- listed as a terrorist organization by Turkey, the U.S. and EU -- resumed its decades-old armed campaign in July last year.

The Fetullah Terrorist Organization is accused of orchestrating the coup plot, which resulted in 248 deaths, and being behind a long-running campaign to overthrow the state by infiltrating Turkish institutions.

According to estimates, out of Austria's total population of 8.7 million, there are around 350,000 people of Turkish origin, and Turkish is spoken by 2.3 percent of the population, according to Statistics Austria.

Hasan Acir, who has worked as a tradesman in Vienna for 37 years, said that he would vote for Bellen.

"I would not vote for a far-right candidate who is anti-Turkish and anti-Muslim," Acir said. He added that if Hofer wins, conditions for Turks living in the country will grow even more difficult.

"It doesn't matter whether you're an Austrian citizen or not, we're always treated as second-class citizens," she said.

"Even if we speak very good German and have an Austrian passport, because we're not named Maria or Hans we're always second class."

Bicer believes that if Hofer is elected, he would try to pave the way for the leader of Austria's far-right Freedom Party, Heinz Christian Strache to form a government.

A resident of Austria for 48 years, she said current living conditions are getting harder every day.

Urging Turks living in Austria to vote, Bicer said Turks should protect their rights and "make a political choice, thinking about their future."

Hairdresser Nuray Basaran voiced a common view among Austrian Turks -- that xenophobia is on the rise and propaganda and politics against "foreigners" had had a negative impact on Austrian society.

"A Hofer victory would mean difficult days for immigrants living in this country," she said. "Immigrants are facing very serious pressure even now. I can't imagine what would happen if the far-right came to power."

However, another Austrian Turk, who asked to remain anonymous, described the Greens as the "supporters of the PKK" and also highlighted the party's proposed resolutions to recognize so-called Armenian "genocide" and calls for EU sanctions against Turkey as approaches that would turn Turks away from Van der Bellen.

In August, Turkey recalled its ambassador in Vienna after Austrian authorities banned Turkish citizens from holding a rally protesting the defeated coup yet allowed a pro-PKK march to go ahead.

"It is better to vote for the far-right instead of those who support terrorists and coup-plotters," the anonymous commenter said.