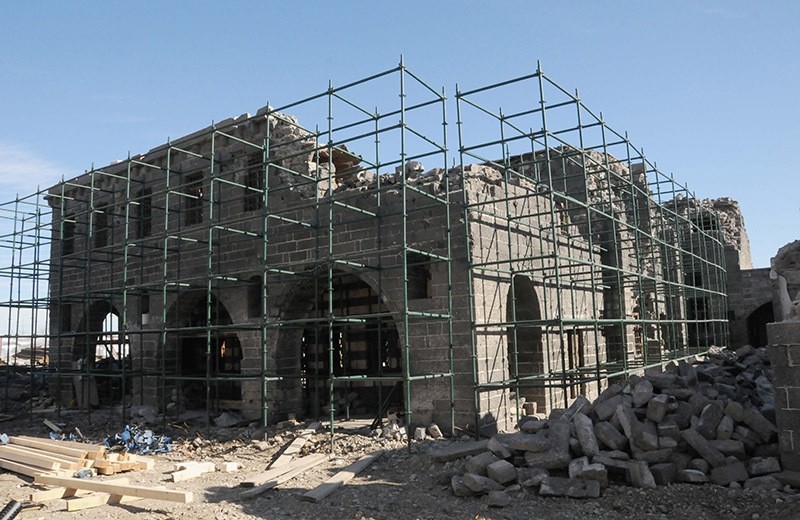 Historical buildings, including two churches, that were destroyed during PKK attacks in the District of Sur of Turkey's southeastern Province Diyarbakır are to be restored by the General Directorate for Foundations.

The General Directorate for Foundations aims now to restore the total of 11 historic sites that fell victim to the PKK violence and preserve them for the next generations.

The restoration of Fatih Paşa Mosque, also known as Kurşunlu (leaded) because of its lead-covered dome, is to be completed by 2018. Being the first Ottoman landmark in the Sur district, the historical mosque was built by Bıyıklı Mehmed Paşa between the years of 1516 and 1521.

The striking Armenian Catholic Church is one of most damaged buildings in the district, as it lost its bell tower, face wall, and clergy house during PKK attacks carried out with handmade explosives last year. The Armenian Catholic Church is the only church in the region that reflects 19th century art taste with its ceramics and plaster structures, which will hopefully return to its former state in 2018.

The Armenian Protestant Church, which is located right beside the Catholic Church, was used as shelter by armed PKK terrorists and will also be restored.

Directorate officials stated that the two churches were restored before in 2011, but need renewed restoration works after the terrorist attacks.

Hundreds of officers and civilians have been killed in PKK attacks in Diyarbakır and other cities in the region.

Parts of Diyarbakır's Sur district are listed as UNESCO World Heritage sites and the government has pledged to restore those sites to their former state as well, reinvigorating the slow economy in the region that has struggled to grow since the PKK began its campaign back in the 1980s. Although the terrorist group largely ceased its blockade of neighborhoods in the city in the past months, it still maintains a presence and occasionally targets civilians, police and troops.