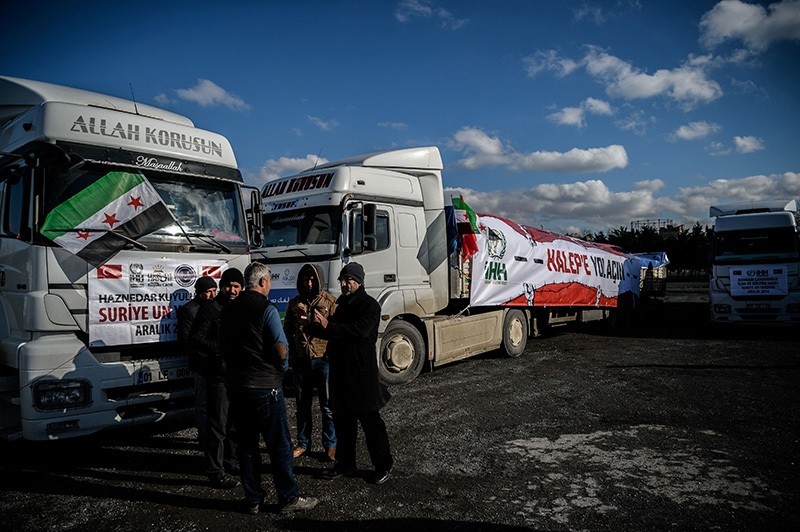 The Turkish Red Crescent has stated that civilians in Syria's Aleppo have been struggling with starvation since the civil war began, and the aid organization's Istanbul office has prepared trucks full of 1,125 tons of flours.

125 tons of the aid arrived on Wednesday at the Cilvegöz customs gate in Turkey's southern province of Hatay, near the Syrian border.

According to Turkish Red Crescent officials, sacks of flour with "You are not alone" written on its side, will arrive step-by-step to the Syrian city.

Meanwhile, another major Turkish charity organization, the IHH Humanitarian Relief Foundation, also sent 351 aid trucks on Wednesday from Istanbul's Kazlıçeşme district to Aleppo for the civilians who are hanging on to life after the massacre of bombings by the Bashar Assad regime and multiple terrorist groups.

The IHH has been also preparing 20 thousand tons of food aid for the Syrian people.

"We are putting bread, food for breakfast, canned food into the 20 thousands of food aid packages," a senior official from the charity organization said.

The IHH's aid trucks are expected to arrive at the Syrian city next Sunday.

In addition, other minor aid organizations in several cities throughout Turkey have also participated in the aid campaigns for the people of Aleppo. Those same people also organized protests against the ongoing civilian massacre in Syria.

Assad regime forces and Iranian-backed Shiite militias have been carrying out executions in Aleppo, entering homes and killing some civilians "on the spot."

The United Nations said that some 85 civilians were killed by regime forces on Tuesday, however, the number given by local sources is much higher.

Syria has been locked in a devastating civil war since early 2011, when the Bashar al-Assad regime ferociously cracked down on pro-democracy protests, which had erupted as part of the "Arab Spring" uprisings.