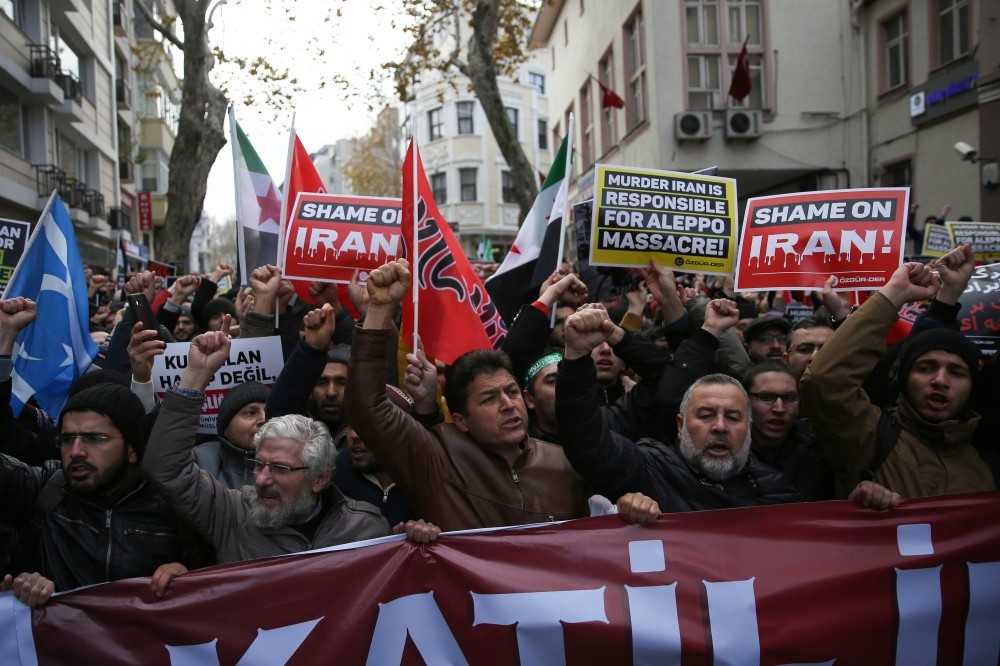 Activists staged a protest outside the Iranian consulate, denouncing it as ,murderer,.
by Daily Sabah Dec 17, 2016 12:00 am

Turks took to the streets again on Friday to vent their fury against Iran as an Iran-backed militia disrupted efforts to evacuate civilians from war-torn Aleppo, where the population is being indiscriminately attacked by Syrian regime forces and Iran-backed groups

Iran, Turkey's eastern neighbor, has been unceasingly incurring the public's wrath for its role in the Syrian conflict, where forces loyal to Bashar Assad seem to always gain the upper hand.

Activists in Istanbul and Ankara strongly denounced the actions of the Iran-backed militia, which have further added to the atrocities in Aleppo, where civilians are still being escorted out in an oft-stalled evacuation plan.

According to unconfirmed reports, the militia opened fire on evacuees and blocked the evacuation from occasionally moving forward, while Turkish media outlets reported on Friday some 800 evacuees were being held hostage by militias.

The recent actions of Iran-backed groups further fueled the public's outrage that was already reflected in three days of protests outside Iranian diplomatic missions.

In Istanbul and Ankara, activists describing Iran as a "murderer" poured into the streets to raise awareness of the ongoing tragedy in Aleppo, where hundreds have been killed by forces loyal to Assad in a months-long campaign and thousands are facing dire food shortages and internal displacement.

Turkey and Iran share a history dating back to the Ottoman Empire, which had its fair share of wars with Iran's Safavids, though it scaled back hostilities later. Currently, the two countries enjoy close economic ties but Iran's siding with Assad, who is viewed as a tyrant killing his own people by a vast majority of Turks, certainly offends the public.

An Iranian minister was on his way to visit the site of a recent terrorist attack with Turkish officials to express his condolences, and a large group of activists were marching their way to the same area to condemn Iran for Aleppo tragedy.

A group of activists staged a rally outside the Iranian consulate after they marched there from a mosque following Friday prayers. "Supporters of killer Iran, you will drown in the blood you shed," they chanted, amid strict security measures by police outside the Iranian mission. Reciting a statement on behalf of the group, activist Rıdvan Kaya said Iran was the real culprit of the oppression in Aleppo. "You will drown in the blood of children you massacred in Aleppo, Damascus and Hama. We will never forget the oppression and we will never make friends with this horde of murderers," he said, in reference to Iran-backed militia. Kaya said Iran still had supporters despite its crimes in Syria.

Some activists hurled eggs at the consulate but police quickly moved to disperse them.

In Ankara's Güven Park, a public park which often is the host of large-scale rallies, a group of activists convened to denounce atrocities and raise awareness to the drama unfolding in Aleppo. A 10-year-old boy, who painted his face red to symbolize the injured children of Aleppo, was among the demonstrators.

In a joint statement, the demonstrators said the blood of the innocent was shed in Aleppo and apart from the actual perpetrators; both the Muslim countries and the West who remained silent were responsible for "this shame."

"We hope the ceasefire implemented for the evacuation of civilians will be a permanent one despite provocation by Iran," the demonstrators said.

Also in Ankara, a group performed funeral prayers in absentia for those killed in Aleppo in the city's Kocatepe Mosque. Police blocked their march to the U.S. embassy while the group chanted slogans against the United States as well as Iran, Russia and the Syrian regime.

Elsewhere in Turkey, protests against Iran and the Syrian regime's allies were held following Friday prayers, where imams delivered sermons denouncing the killings.

The country's public broadcaster TRT and 50 local TV stations plan to air a 16-hour live broadcast on Sunday under the title "Aleppo Is Not Alone" to raise awareness of the drama. Politicians, journalists, members of nongovernmental organizations (NGOs) and celebrities will discuss the humanitarian tragedy and how to respond to it in the broadcast.

Syria has been entangled in a civil war since 2011, after the Assad regime cracked down on pro-democracy protests. Iran, which maintains close ties both with Assad and his father Hafez Assad, the previous ruler of the country, was among the first countries to offer assistance in crushing the opposition that later took up arms and formed the Free Syrian Army in the face of increasing violence by Assad forces.

Members of Iran's Revolutionary Guards have been reported as fighting in Syria, while Hezbollah, the Lebanese organization supported by Tehran, also sent its fighters to aid in Assad's crackdown on opposition. Hundreds of thousands of people are believed to have been killed, and millions more displaced by the conflict.
RELATED TOPICS