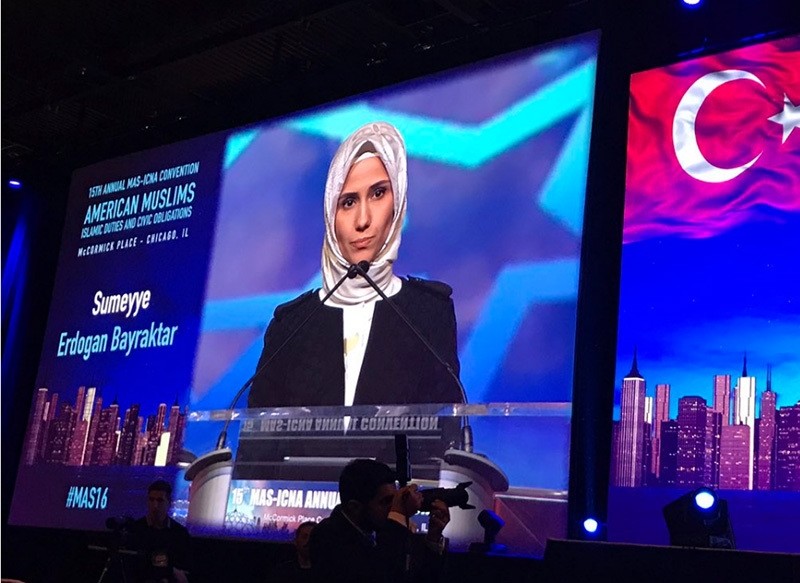 President Recep Tayyip Erdoğan's daughter, the Vice Chair of the Women and Democracy Association (KADEM) Sümeyye Erdoğan Bayraktar, said on Tuesday that "FETÖ is a radical group like Daesh and Boko Haram." She spoke at a meeting held in Chicago on the sidelines of the 15th Annual MAS-ICNA Convention, the largest Islamic convention in North America, which she attended as the guest of honor.

In the "July 15 and heroes resisting against coup" meeting organized by the Turkish-American National Steering Committee (TASC), Bayraktar warned that the Gülenist Terror Group (FETÖ) is very similar to terrorist organizations and will pose a threat to all Muslims throughout the world if significant steps are not taken against them.

Reminding the audience that past coup attempts had achieved their goals and damaged democratic institutions in Turkey, Bayraktar said "In the last coup attempt [July 15], Turkish people showed they would not let another attack, tanks on streets or coup plotters threaten them with the guns that were bought with public taxes."

She noted "In the last 15 years, Turkish people have been more interested in politics and democracy, and they stand against tutelage", adding that FETÖ is behind the July 15 attempted coup and the terror group has a distorted understanding of Islam.

Bayraktar also spoke about the Western countries' hypocritical stance on the July 15 coup attempt, saying "Although Western leaders express anti-coup discourse and talk about the importance of people's will, they have failed to stand against the perpetrators of the July 15 failed coup attempt.

She continued by saying that Western leaders imply that military intervention in civil politics and attacks against democracy is tolerable and added that Turkish people had lost their trust in the West due its double standards.

She noted that the West's approach regarding Turkey is problematic and 'has reached the limit of clinical obsession.'

The 15th Annual MAS-ICNA Convention, which is one of the largest and most diverse Islamic conventions in North America, started on Monday to discuss the problems facing the Islamic world and Muslims in the U.S.

This year's theme for the summit, which is held in Chicago's McCormick Congress Center, is "American Muslims: Islamic Duties and Civic Obligations."

The humanitarian tragedy in Syria was also one of the main topics which were discussed in detail at the meeting. Academics, opinion leaders and Muslim leaders attended the summit as speakers.