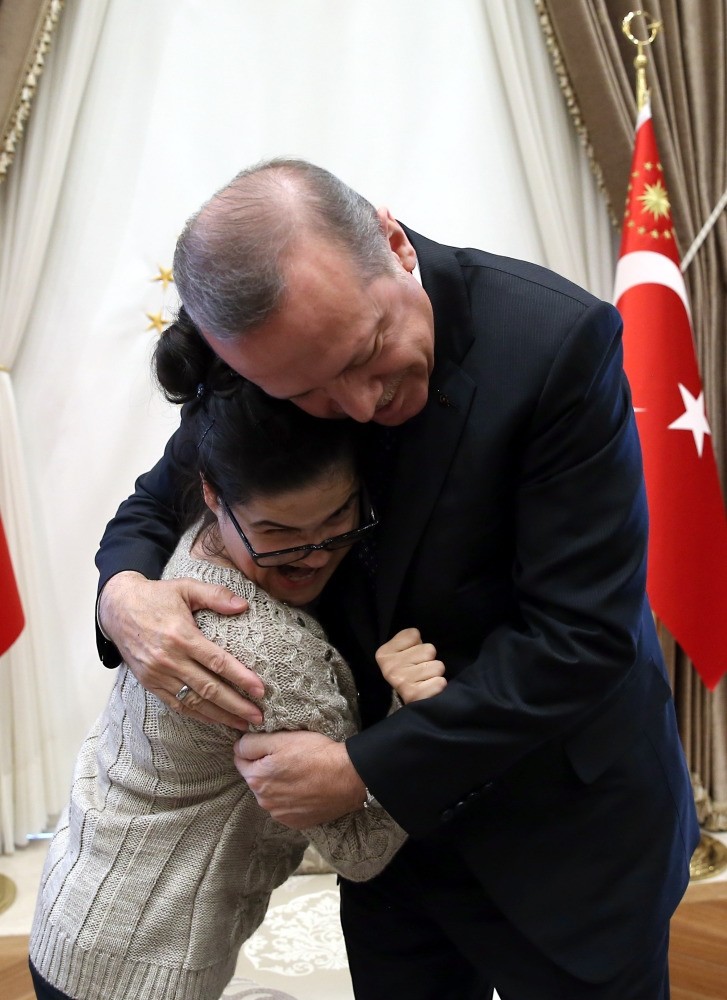 by Compiled from Wire Services Jan 03, 2017 12:00 am
A 22-year-old cerebral palsy patient finally had a chance to meet President Recep Tayyip Erdoğan, one of her beloved figures, when she was received at the Presidential Palace Monday.

Gülşah Yağmur Yazıcı from the northwestern city of Kocaeli has already received a heart-warming phone call from Erdoğan after she shared a charcoal drawing of the president in a tweet that said, "This is all a disabled person is capable of. I hope my president will see my picture too. I love you very much." Yazıcı also mentioned Erdoğan's official account, where the president replied, "Thank you very much dear Gülşah. I praise your effort. I would like to host a daughter of ours with such a beautiful heart at the Presidential Complex."

During the meeting, Yazıcı presented a drawing of the president doing the now famous "Rabaa" gesture that symbolizes injustice at the United Nations where five powers have the main say in global matters.

Prime Minister Binali Yıldırım also joined the meeting of Yazıcı and her family with the president who gifted the young lady a laptop computer.

Speaking to Anadolu Agency earlier, Yazıcı's mother said her daughter is very happy and proud to be speaking to President Erdoğan. "Gülşah decided to draw the picture of our president in two to three days. The day when we were called, she shared it on Twitter after drawing it in a couple of hours. She woke us up all of a sudden when we were sleeping," Yazıcı said.

She also said Yazıcı was not able to walk until she was 5 years old, and she started going to school at the age of 12 after a long period of treatment.
Last Update: Jan 03, 2017 1:07 am
RELATED TOPICS