Syrian children back to school at home with Turkish help 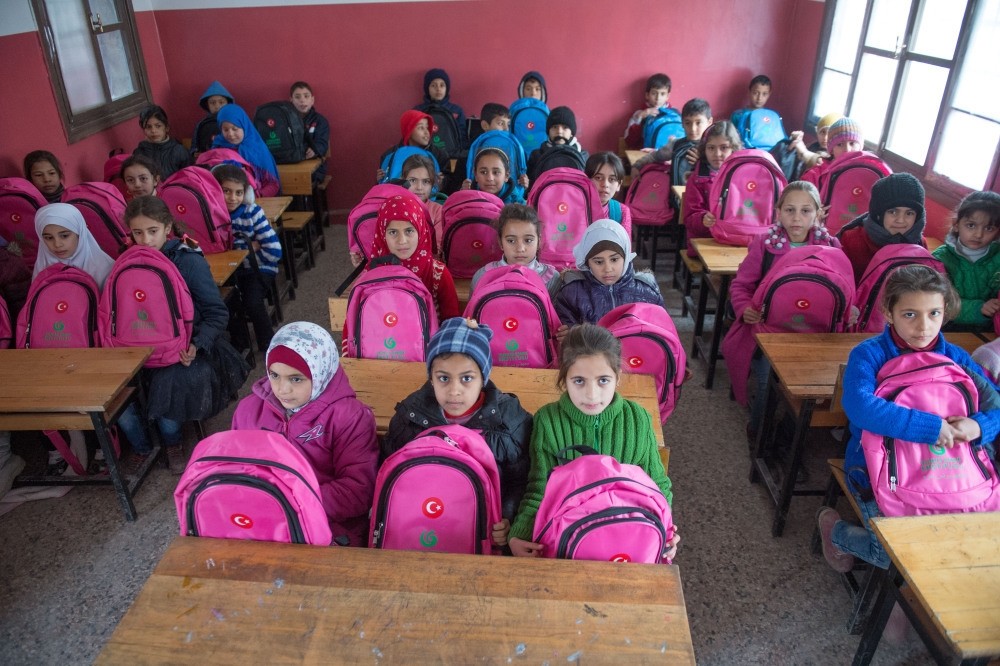 Children at a school restored by Turkey in Jarablus show school bags donated by a Turkish charity.
by Safure Cantürk Jan 03, 2017 12:00 am

In addition to helping Syrians defeat the Daesh threat, Turkey is also building and rebuilding schools in its southern neighbor so that children will not fall into the ‘terrorist trap,' the head of the Turkish authority overseeing schools said

While leading efforts to help the Syrian opposition forces gain the upper hand against Daesh, Turkey has also kept up its contribution to post-victory rebuilding in towns captured from the terrorist group. Schools have been prioritized in the rebuilding process and the Maarif Foundation of Turkey has already opened two schools in Jarablus, liberated by the Free Syrian Army (FSA) from Daesh. The schools - one of which was converted into a prison by Daesh when the terrorist group took over the town - have been renovated and refurbished.

More schools are planned for other towns captured from the terrorist group. Birol Akgün, head of the state-linked Maarif Foundation, said they build schools to fight against the terrorist groups' recruitment among the disillusioned youth and children. "We build schools so that [Syrian] children will not fall in the 'terrorist trap,'" Akgün told Sabah newspaper.

Turkey launched Operation Euphrates Shield in late August focusing mainly on Syria's northern region close to the border. The operation concentrates on helping the FSA to weed out the Daesh terrorist group from towns in the area. Daesh also poses a threat to Turkey after a string of terrorist attacks were carried out by the group on the Turkish side of the border in Istanbul and Ankara. Though Daesh mainly draws in recruits from abroad, the danger for Syrian children and youth is to be captivated by the warped ideology of the terrorist group. Turkish authorities see education as the key to prevent the rise of any ideology associated with terrorists. To that extent, Maarif Foundation, which oversees Turkey-sponsored schools across the world, opened two schools for 2,500 students in Jarablus. Jarablus was one of the first towns to be liberated by the Turkey-backed FSA during Operation Euphrates Shield in Syria, where a six-year-old war is still brewing between forces loyal to Bashar Assad and the FSA. Reduced to a ghost town with only around 2,000 residents, Jarablus has seen a revival after the liberation with Syrians returning from Turkey and safer areas of Syria.

Maarif Foundation plans to open four more schools in Syria. Akgün said Turkey works to build schools or furnish them wherever the need for education arises across the world, and school construction in the Syrian towns freed from terror is among its tasks.

The school term started on Dec. 19 in Sadiq Hindawi and Ahmed Selim Molla, two Jarablus schools run by the local administration, with some 2,000 students already enrolled. At Sadiq Hindawi, which was renovated by Turkey, 29 teachers cater to 1,300 students in morning and afternoon classes, while 34 teachers strive to keep educational services open at the Ahmed Selim Molla schools, attended by some 1,150 students in 22 classrooms. All teachers are locals, and among them are those who have returned from Turkey where they had stayed at refugee camps. Turkey recently dispatched a team of architects and technicians for the repair and refurbishment of four schools in the area and plans to reopen them as soon as possible according to the officials.

In Azaz, formerly a Daesh-held town cleared of terrorists by the Turkish-backed operations, Maarif Foundation will open a vocational high school to train healthcare workers at a time of serious shortage for qualified personnel. The foundation plans to open more schools in al-Rai, al-Bab and Manbij, other towns held by Daesh which have mostly been cleared of terror threats.

Maarif Foundation is named after an Ottoman-Turkish word for education, which comes from the Arabic word for knowledge or wisdom, offering education, schools and more for the Turkish community abroad.
Last Update: Jan 03, 2017 11:25 am
RELATED TOPICS