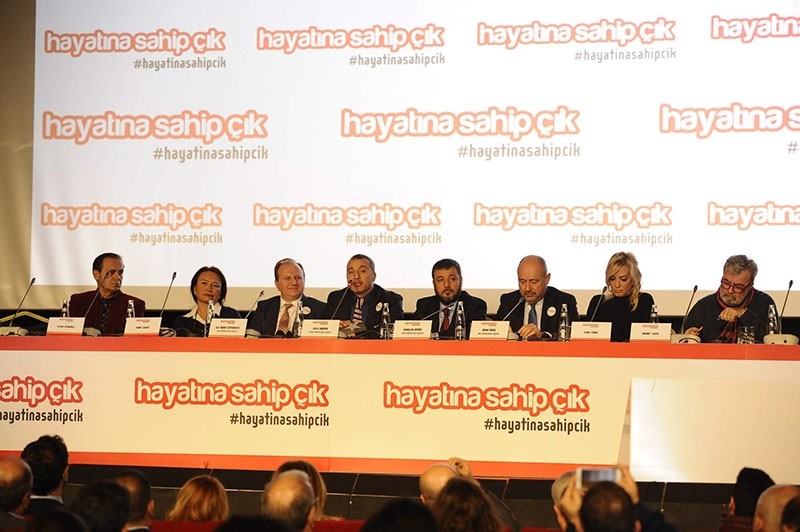 After the recent attacks by a diverse array of terrorist groups, Turkey has strived to ensure that terror attacks do not become a fact of life.

In a perceived climate of fear as terror hits big cities, more and more people turn defiant, not allowing terrorism to isolate the nation and drive them to lock themselves up in their homes. This is the idea behind "Embrace Your Life," a campaign by business associations and celebrities that reel from the impact of terrorism on the economy.

Though at first it seems like a campaign mainly urging people to do more shopping instead of cuddling up with their loved ones at home anxiously watching news, it is much more than that according to the campaigners.

A video promoting the campaign is making the rounds on social media. In it, celebrities, ranging from famous actor Kenan İmirzalıoğlu to the world-renowned coach of the national football team, Fatih Terim, tell the audience not to avoid what they do every day and go out.

Terim indulges in a meal at a cozy restaurant, as he says, "Don't let them cause you to put off sports activities," while İmirzalıoğlu tells everyone "not to stay at home," as he walks along the Bosporus and stands at the same spot where Reina, a popular nightclub in Turkey where a Daesh-linked gunman killed 39 people during New Year's celebrations, is located.

"We mourn those we lost (in the attacks), but we have to embrace life more for our children," Sinan Öncel, head of the United Brands Association (BMD) said.

The BMD is among the business groups behind the campaign, which was launched earlier this week in Istanbul. Öncel said at a press conference that they called for embracing the future.

"We have to keep factories running, restaurants and department stores open. Let cinemas, theaters and entertainment venues live by the rhythm of life," he said.

Alp Önder Özpamukçu from the Chain Stores Association (KMD) said that the string of worrying incidents in Turkey attempted to instill fear across the country.

"We believe our solidarity, the solidarity of the nation, the private sector and the state, against terror will render the terrorists' purpose ineffective," Özpamukçu said.

As Turkey emerged as a strong actor in its region and as part of the international community in the past decade, it found itself besieged with threats by terrorist groups. In the past two years, the PKK terrorist group, already involved in a decades-long campaign of violence in the southeast of Turkey, resumed its activities. The rise of Daesh in unstable Iraq and war-torn Syria, two of the country's neighbors, added to terror woes. The two groups killed hundreds of people in a series of terror attacks, starting with a suicide bombing, blamed on Daesh, at a rally in the southeastern town of Suruç in July 2015.

The last major attack was the one at the Reina night club in Istanbul, with its perpetrator still at large. As several government officials pointed out, terrorist groups almost "take turns" carrying out attacks as they happened in brief intervals, ranging from Istanbul, the country's most populated city, to the western city of İzmir and the central province of Kayseri.

Özpamukçu said they firmly believed that the wounds terrorism inflicted would be healed and public morale will be higher in time and peace will prevail.

"Showing that we will not be daunted by terror attacks, embracing life, continuing with our daily life will be the greatest reaction to terrorism," he said.