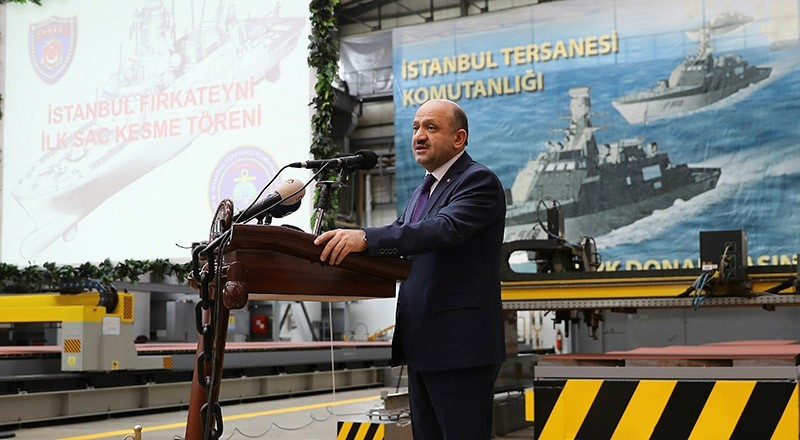 After completing the construction of Ada (Island) class corvette style warships in national facilities, the Turkish Naval Forces has announced it will build a frigate that would be Turkey's fifth domestically made warship.

The new vessel is set to be named "Istanbul," and it will be Turkey's first domestically made frigate. The Naval Forces Command completed the design of this Class I vessel in about two years based on the Ada-class corvette design.

Defense Minister Fikri Işık joined the top military brass at a shipyard in Istanbul to introduce "Istanbul," which will be the first vessel of its kind entirely made in Turkey.

During a speech at the Istanbul Shipyard Command in Pendik district, Admiral Bülent Bostanoğlu, Commander of the Turkish Naval Forces said, "The Istanbul frigate was designed using experience we have gained from Burgazada and Kınalıada corvettes… this ship is going to be the first original Turkish frigate to be realized in our republican history. We must also underscore that there is a high degree of stability behind the physical presence of the ship. "

Bostanoğlu emphasized that the Naval Forces should be prepared for the security environment of the 21st century, and maintain a goal of protecting the country and national interests from the open seas.

The Admiral continued, "Essentially, our frigate Istanbul is part of a never-ending dream that we have never given up, and it is a dream that will be realized."

Class I frigates are longer than Ada-class corvettes. Despite its large size, the projected national frigate will be able to reach Somalia or Yemen from Istanbul without refueling. It will be equipped with Evolved Seas Sparrow Missiles, and unlike corvettes, which have a guided missile range capability of 5 kilometers, the frigate will be able to project missiles to 18.5 kilometers.

The first national frigate, "Istanbul," will be completed within the next four years.

A "frigate" refers to a type of warship that is used to protect other ships and is often employed in anti-submarine warfare. Frigates closely resemble corvettes, destroyers, cruisers, and even battleships.

Though it is the second largest army in NATO, Turkey has long lacked a domestic defense industry. In recent years, it set out projects to make it more "national and domestic" as President Recep Tayyip Erdoğan called it. The Turkish Armed Forces (TSK) now employ a locally made helicopter, assault rifle, a missile, artillery and unmanned aerial vehicles used in anti-terror operations in a country suffering from attacks from a diverse array of terrorist groups. Turkey also plans on building a submarine in the next decade.