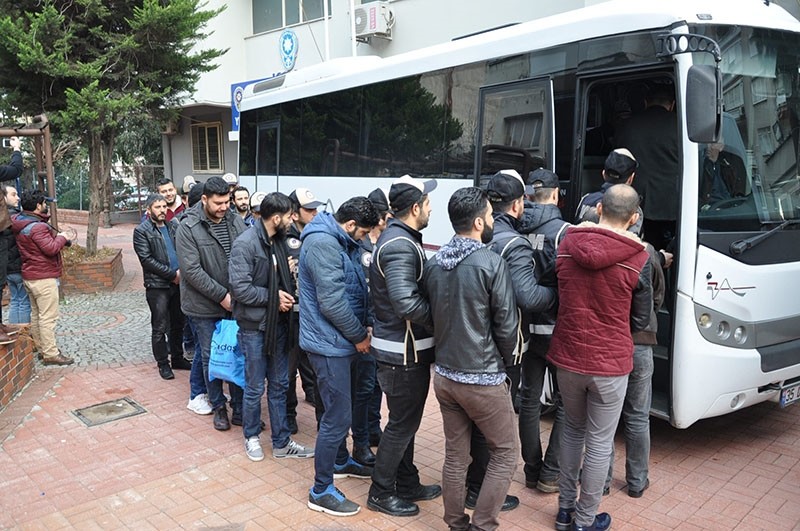 A unit of the Anti-Smuggling and Organized Crime Branch of Izmir police carried out an extensive operation against the Izmir based human trafficking gang smuggling migrants from Turkey's western Aegean region to Greek islands, detaining a total of 23 suspects including two gang leaders.

Izmir police detained the human traffickers as they were planning to smuggle migrants to Italy, using a large ship.

The police stated that the criminal network is being assessed to have made an illegal profit of about 4 million Turkish liras.

During these 14 operations, a total of 37 suspects were detained, of whom 34 were Turkish citizens and three Syrians, before being transferred to the courthouse. Seven suspects were released on conditions of trial without arrest, while 30 suspects including three Syrians were arrested.

The suspects also admitted to contacting Syrians in the southern provinces of Adana, Mersin, Gaziantep and Kilis bordering Syria. Those who wanted to take the illegal trip to Greek islands were first transferred to Istanbul and Izmir, before reaching coastal towns Çeşme and Dikili, where the boats set sail.

Over the past year, thousands of people have made short but dangerous attempts to cross the Aegean in a bid to reach Greece, before going on to Northern and Western Europe.

An EU-Turkey agreement reached on March 20 allows for the return of "irregular migrants" to Turkey from Greece in exchange for Syrian refugees to be relocated within the EU.