No autistic child left behind with 'Hope Houses' project 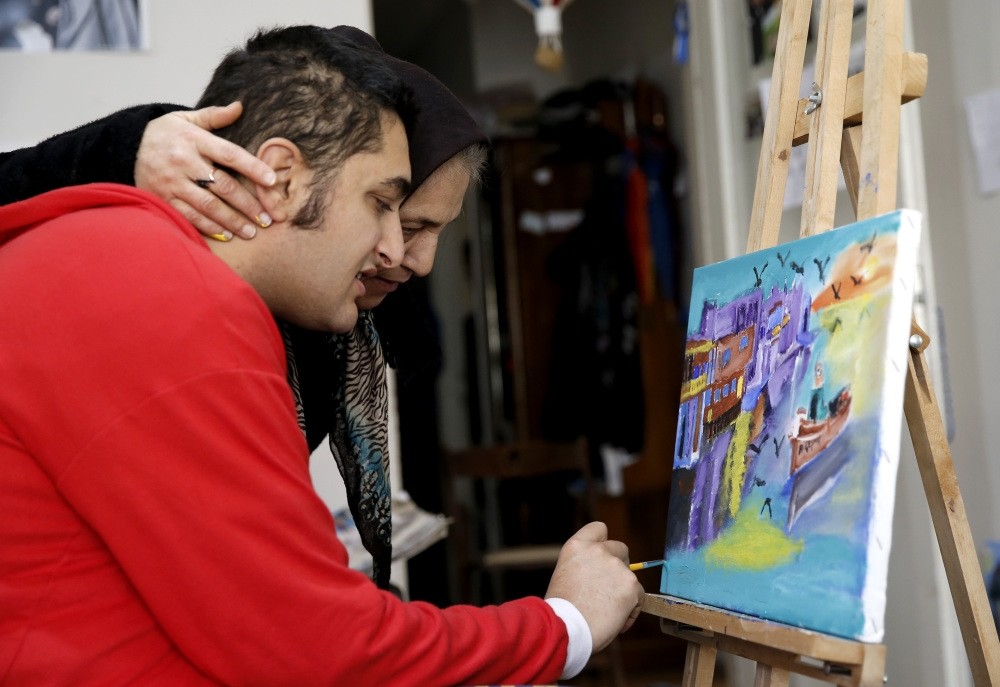 Erkan Ku0131zu0131ldau011f, an autistic artist, draws a painting at home as his mother looks at it. Unofficial numbers show there are more than 1 million people affected by autism in Turkey.
by Daily Sabah Feb 02, 2017 12:00 am

Staying together with her autistic son despite her old age has always been a wish of Gevher Kara whose petition finally found response in ‘Hope Houses,' where autistic individuals are offered home care without having to leave their parents

"What will happen to my autistic son or daughter if I die?" has been a question bothering older parents who are the sole, round-the-clock caretakers of their autistic children. A petition led by the co-founder of a foundation for autistic children, Gevher Kara, has paved the way for the improvement in home care for autistic people while boosting the number of "Hope Houses" where they can stay with other disabled people or family, in the company of healthcare staff. The Ministry of Family and Social Policies' project also offers the families of autistic children access to caretakers in cases where parents are unable to attend to the needs of their children.

For the mother of 45-year-old autistic man Taylan, starting an online petition to address these concerns was the only way to seek a solution in the face of laws barring the autistic man from staying with his mother in the nursing home where she planned to stay. Contrary to the mother's wishes, Taylan was to be sent to a center for autistic adults, compelling his mother to start the petition which quickly gathered hundreds of thousands of signatures, eventually reaching the Ministry which oversees the care of citizens with special needs.

On the heels of the petition's success, the state began providing in-home nursing care for elderly parents unable to look after their children, revising the former stipulations which only provided social benefits to families to care for disabled children on their own without support from the Ministry.

The result came in the form of "Hope Houses," a fledgling project providing accommodations to a maximum of six disabled people in houses under caretaker supervision according to appointments made by the Ministry. In the houses, whose number already reached 123, one parent of the disabled individual can be accommodated. The project aims to encourage disabled individuals to adapt easier to daily life by making connections and establishing social relationships with their neighbors while equipping them to live more independently.

According to U.N. data, more than 1 billion people - approximately 15 percent of the world's population - live with some form of disability. Almost 80 percent of these live in developing countries.

People with autism often have social problems, including difficulty communicating and interacting with others, repetitive behaviors as well as limited interests or activities and symptoms that hurt the individual's ability to function socially, at school or work, or in other areas of life. It affects one in every 68 children across the world. No definitive figures are available but unofficial numbers show there are more than 1 million people are affected by autism in Turkey.

Last year, Turkey announced its first autism action plan aimed at raising social awareness of autism, early diagnosis and helping families with autistic children on their care and encouraging their education. The plan also brings new regulations for the inclusion of autistic citizens in the public workforce and better integrative measures for autistic students in the education system.

Autistic citizens and their families say they face discrimination, experience difficulties in finding employment and have limited access to education.

During an event organized to introduce the action plan held in December, Minister of Family and Social Policies Fatma Betül Sayan-Kaya said they would work to increase public awareness of the challenges of living with autism and help with integration in schools and the workforce.
RELATED TOPICS