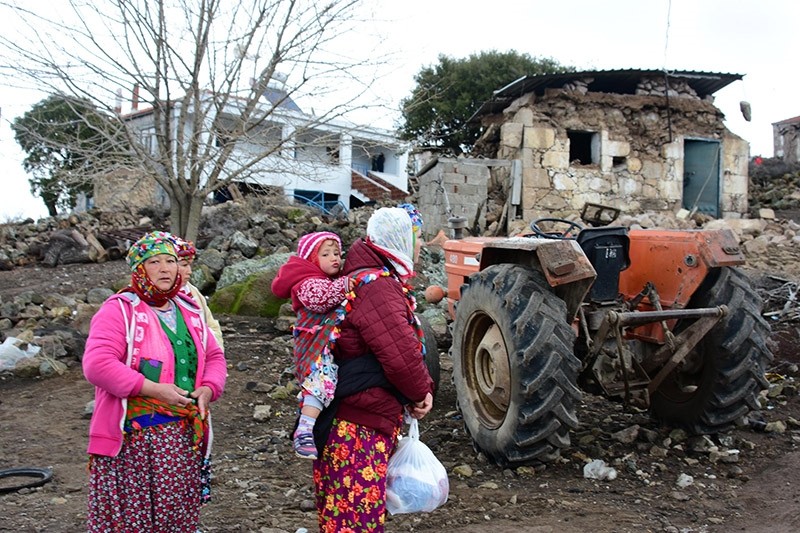 Turkey's western city of Çanakkale, known as a popular hub of migrants trying to reach nearby Greek islands, was gripped panic and fear, after two earthquakes, 5.3 on the Richter scale, rocked the town yesterday.

The first earthquake hit at 6:51 a.m. in the morning and was followed by another one at 1:58 p.m. in the afternoon, which was much closer to the surface than the first jolt. No casualties, except five minor injuries, were reported.

The tremors, however, heavily damaged some 40 buildings, mostly houses in the villages near the epicenter, which was recorded as some 26 kilometers off the coast of Ayvacık.

Authorities said some 11 villages were directly affected by the quake while the earthquake was felt in nearby cities too.

Visiting the damaged villages, Çanakkale Governor Orhan Tavlı said that the disaster and emergency authorities set up tents in the region, for the residents of the damaged houses. He added that heavily damaged buildings will soon be demolished.

A reminder of a major earthquake in 1999 that killed tens of thousands people in several cities in Turkey, Çanakkale locals stayed outdoors for hours, while emergency crews were put on alert for aftershocks or the possibility of another earthquake.

The last aftershock was recorded at 2:45 p.m., at a magnitude of 4.4, while experts said more tremors were to be expected over the next week.

Speaking to the Doğan News Agency, Professor Övgün Ahmet Ercan, an expert from Istanbul Technical University, said there were "two possibilities," about the aftermath of the two earthquakes.

"Either, there will be a week of aftershocks and it will end or we can witness a bigger earthquake, possibly of a magnitude of 6.5," he said.

He said the past eight months of observation in the region showed "an accumulation of minor earthquakes that further increased in January."

Turkey, which lies on a number of active fault lines, was rocked by a 7.4-magnitude earthquake on Aug. 17, 1999 that killed thousands in Kocaeli, Adapazarı, Istanbul, Yalova and nearby towns in northwestern Turkey.

Years after the disaster, Turkey has seen an overhaul of measures to prevent damage from earthquakes, such as compulsory earthquake insurance and campaigns to raise awareness and inform the public.

More importantly, the government undertook the ambitious project of urban transformation. Old, crumbling buildings across the country are being demolished to make way for new, earthquake resistant buildings.

Scientists, however, do not rule out "a big one," which is estimated to hit the Marmara region north of Çanakkale over the coming decades.