Locals in Çanakkale gripped by fear over series of quakes 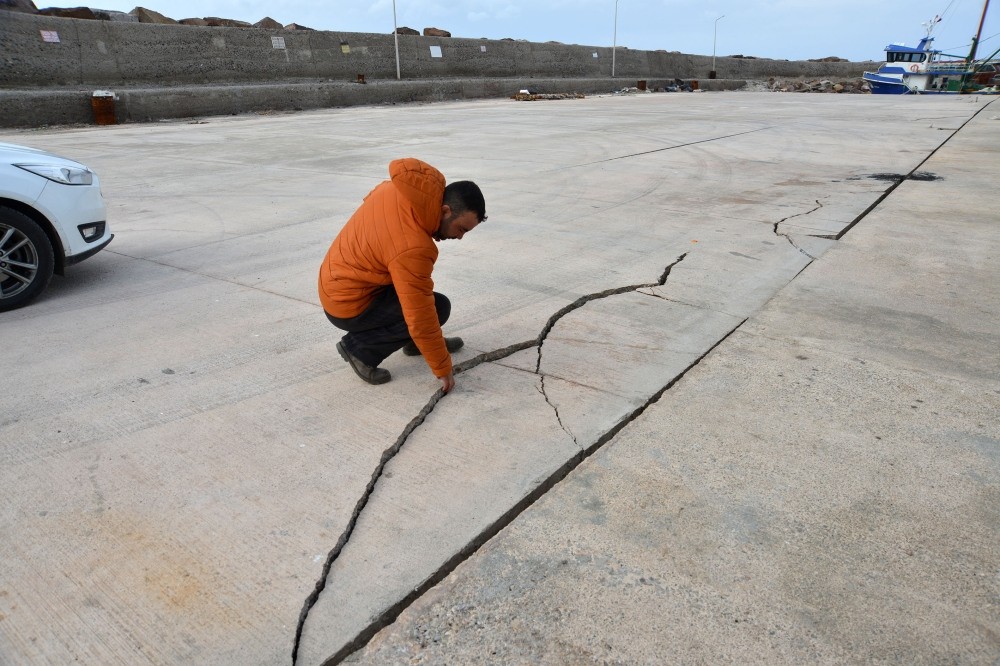 A man shows a crack the earthquake caused at a port in Gu00fclpu0131nar near the town of Ayvacu0131k, the epicenter of yesterdayu2019s tremor.
by Daily Sabah Feb 08, 2017 12:00 am
Two days of earthquakes and hundreds of aftershocks varying between 4.2 and 5.3 in magnitude have worried locals in Çanakkale, a western province where the epicenter is a town called Ayvacık on the shore of the Aegean Sea. Eight people were injured and a number of buildings, mostly in villages, were damaged. However, scientists, including the head of the observatory overseeing seismologic movements, have dismissed fears of a "big one" occurring.

The first quake was early on Monday when a 5.3 magnitude tremor occurred off the coast of Ayvacık. It was followed by another earthquake in the afternoon. Both were followed by hundreds of aftershocks, most higher than 4.0 in magnitude. Then, in the early hours yesterday, a 5.2 magnitude earthquake hit the town and its epicenter was on land, triggering concerns that a bigger earthquake was approaching. Emergency services deployed tents and sent mobile housing units as well as food and other emergency aid for locals displaced due to heavy damage to the buildings. Seismology experts assured people the tremors were natural and not a harbinger of a "big one" like the quake that struck the Marmara region, north of Çanakkale, in 1999 and killed tens of thousands of people.

The earthquake, which was also felt in nearby cities, kept locals awake at night while many in undamaged buildings feared to go back to their homes. Emergency crews delivered tents, blankets, beds and other items to locals, and only three among the injured remained hospitalized yesterday. Mehmet Halis Bilden, head of AFAD, the state-run emergency authority, urged locals to "never step into their damaged or even less damaged homes" unless authorities give the green light on a place's safety. Bilden, who visited the quake-hit villages, said they would deploy more mobile units for accommodation and other residents' needs. Mobile kitchens were also set up in damaged villages.

Professor Haluk Özener, the head of the Kandilli Observatory based in Istanbul which oversees seismic activities all across the country, told reporters yesterday that the tremors in Çanakkale were natural and "unsurprising." "It is nothing abnormal," he continued. According to him, every earthquake should be analyzed on its own specific circumstances and the last three earthquakes "may or may not be precedent of a bigger earthquake in the wider region." He was also cautious while answering a question on whether the quakes may trigger other fault lines and cause an earthquake in nearby Istanbul. "We cannot say they are connected but we don't know for sure," he said, adding that an earthquake of a magnitude over 7.2 in Istanbul "would not be unexpected."

Özener said Çanakkale may suffer from aftershocks for about two weeks and urged the public to get accustomed to such earthquakes. "Earthquakes of this magnitude are quite normal for Turkey. Sometimes they don't happen in quick succession, but we should be prepared for them all the time," he said.
RELATED TOPICS