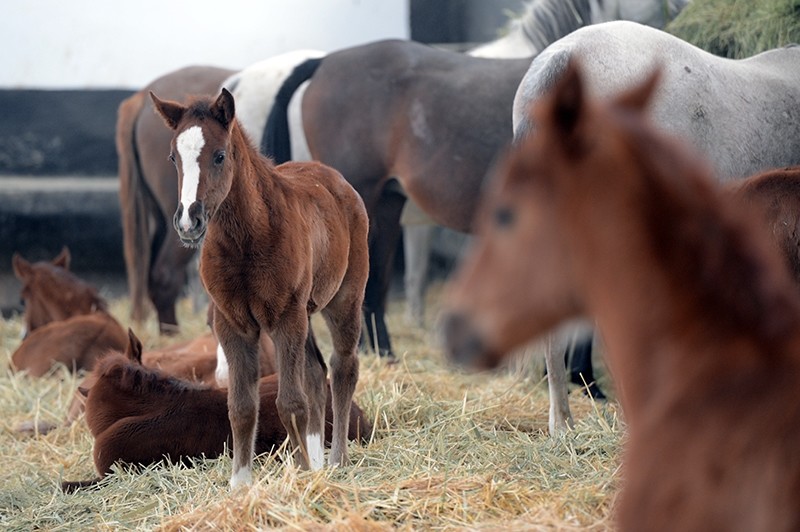 Breeders from the Sultansuyu Agricultural Farm in the eastern Anatolian province of Malatya have welcomed nearly 50 newborn thoroughbred Arabian horses since last month.

Farm staff carefully raise the horses until they are one or two years old, at which point they are sold at auction in two different categories: race foals and elite foals. The horses bring in between four and five million Turkish lira every year.

The 27,000 acre farm first started operating in the Akçadağ district of Malatya province in 1865 under the name of "Hattı Hümayun Farm," but was renamed Sultansuyu in 1928. Today it is one of the leading centers raising the valuable purebred Arabian horses.

About 50 foals have been born on the farm since January, and another 60 are expected to come into the world by mid-May.

For the first six months after birth, the future champions stay with their mothers and drink milk. The operating staff work diligently to ensure that the foals are well taken care of, and they do not look away from the young horses for even a moment.

Because of their strength and durability, thoroughbred Arabian horses were popular in the Ottoman Empire. The horses were obtained from the Arabian Peninsula through trade, diplomacy and war.

The Ottomans encouraged the establishment of private stud farms to ensure a steady supply of cavalry horses.

The prized stallions were often given as diplomatic gifts to European nobles, and later to Americans. In 1877, Sultan Abdul Hamid II gifted U.S. President Ulysses S. Grant with an Arabian stallion named Leopard.

Arabian horses are still among the favorite breed of horses in the sports field today.