Turkish mayor jumps into the sea to save struggling diver 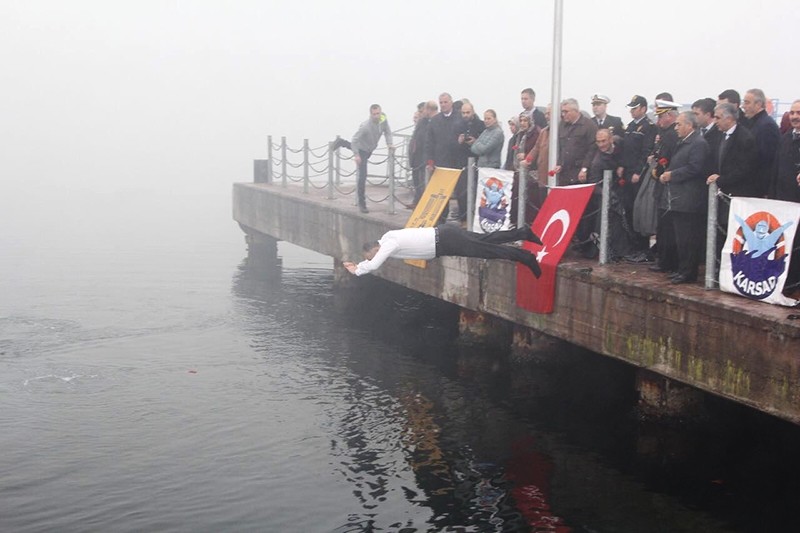 Mayor in northwestern Turkey jumps into the sea to save a faint diver who was in danger of drowninghttps://t.co/dDHNKAYOVJ pic.twitter.com/XLxbiZwHpw

Karamürsel town Mayor İsmail Yıldırım jumped into the sea on Wednesday to save a faint diver who was in danger of drowning during the 59th commemoration ceremony of the "SS Üsküdar Boat Disaster" in the northwestern Turkish province of Kocaeli.

Prior to the incident, a ceremony had been held at the Karamürsel cemetery to recognize the lives lost during the sinking of the SS Üsküdar, which was one of the biggest sea disasters in Turkish Republican history.

The ceremony continued at the pier to leave carnations by the sea for those who had perished in the accident and to recognize the members of the Karamürsel Underwater Sports Association (KARSAD).

A KARSAD diver, Şenay Ertorun, went into the sea to retrieve a banner, when he came out of the water and called for help. Ertorun was approximately 10 meters from the pier when he called out, "I am drowning," and the Karamürsel mayor jumped into action.

Yıldırım, who also has a diving certificate, took off his shoes, coat, and jacket and dove into the sea to rescue Ertorun.

After the mayor reached Ertorun, he swam him to safety while members of the ceremony applauded the heroic act.

Both Yıldırım and Erturun are reported to be in good health.

The SS Üsküdar was a small passenger ferry that sank in lodos weather on March 1, 1958 in the Gulf of Izmit. The sea disaster killed 265 passengers and 7 crewmembers.