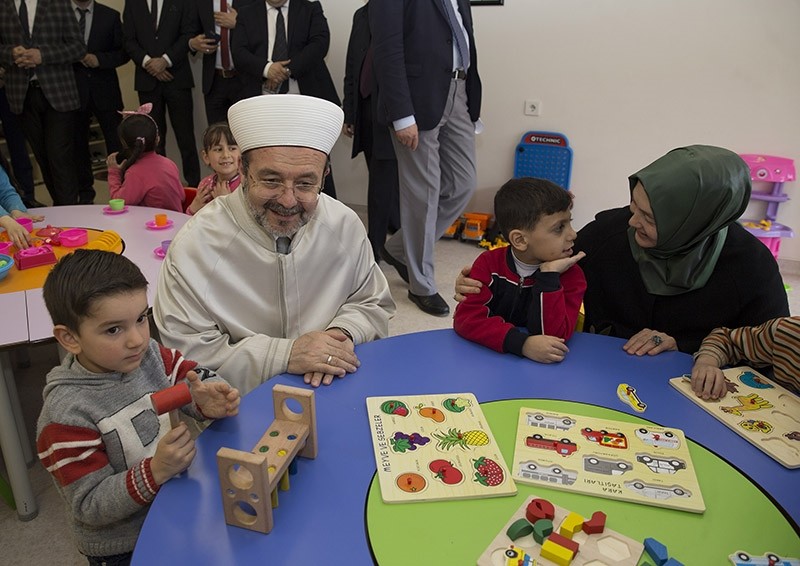 The Presidency of Religious Affairs (DIB) head Mehmet Görmez, told Syrian refugees at the Social Support and Education Center (KAGEM) in Ankara that they should feel at home in Turkey.

"Do not regard this place as a town, a house, or a country in which you are a guest," he said, "This is your home, your country, this land is your land," Görmez told the Syrians, who are receiving vocational and Turkish language at the three-month-old center.

Emphasizing that the Syrians were both fellow-Muslims and neighbors to Turks, Görmez said, "I hope you live happily with your own children here, and never let your country leave your heart."

Görmez and his wife Hatice visited the center located in the Altındağ Önder neighborhood of Ankara and met with the KAGEM Director Hicret Toprak and visited the classrooms where the Syrians are receiving education.

Syrian students presented Görmez with drawings of Turkey and Syria as well as letters they had written in Turkish.
Two Syrian students, Mazin Atlahan and Afghan Qali, then read thank you letters in Turkish in one of the classrooms. Görmez said he was very happy to see that the children had learned the Turkish language.

Turkey currently hosts some three million Syrian refugees, more than any country in the world. Syrians began fleeing their homeland in 2011, at the start of the bloody civil war that has cost more than 400,000 lives.