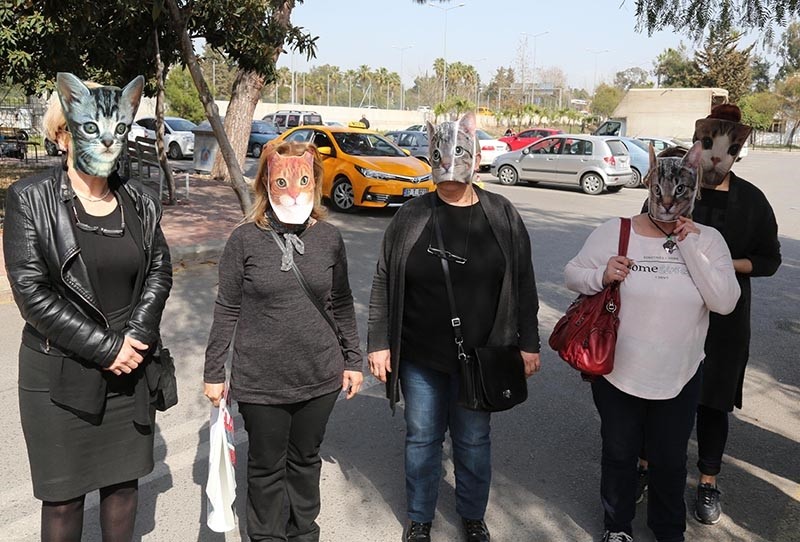 A group of women infuriated about the killing of around 50 street cats in Turkey's Mediterranean resort town of Alanya, put on cat masks and wanted to submit a petition as "cats" but were stopped by the police, who warned the women posing as felines that only human-beings have the prerogative to submit such petitions.

"We want to submit our petition as cats because cats can't do so," Hediye Gündüz, a spokesperson for the group told the police when they were warned that they cannot enter the building of Antalya Governorate with masks.

Gündüz also said that she is a cat and cannot talk the language of humans.

"Is there a cat language that the governorate can understand?" the woman said.

Police officers said that there are no issues with Gündüz submitting a petition, but she cannot do it on behalf of the cats.

After the bizarre incident, women removed their masks and went inside to submit their petition.

Speaking after the submission, Gündüz urged the Ministry of Environment and Urban Planning to take more action against animal cruelty.

"We want those who torture or kill animals to be punished with imprisonment" Gündüz told the press.

Las week, a Russian man was detained in connection with the poisoning of street cats in Turkey's Mediterranean resort town of Alanya.

Alanya locals were shocked when approximately 30 street cats were found dead in the Mahmutlar neighborhood of the seaside town on February 24. An additional 20 cats died during the day following the initial discovery.

Neighborhood residents and animal lovers began to suspect foul play, and believed that the cats had been poisoned. The citizens started to survey security camera footage from apartments and buildings on the street where the cats were found.

In the footage, locals found that there was an unidentified person walking around the neighborhood with a suspicious bag feeding the street animals, and they reported their findings to the police.

The Mahmutlar Gendarmerie Police team determined that the person from the security cameras was a Russian citizen, identified as 53-year-old Valery V., who resides in the same neighborhood.