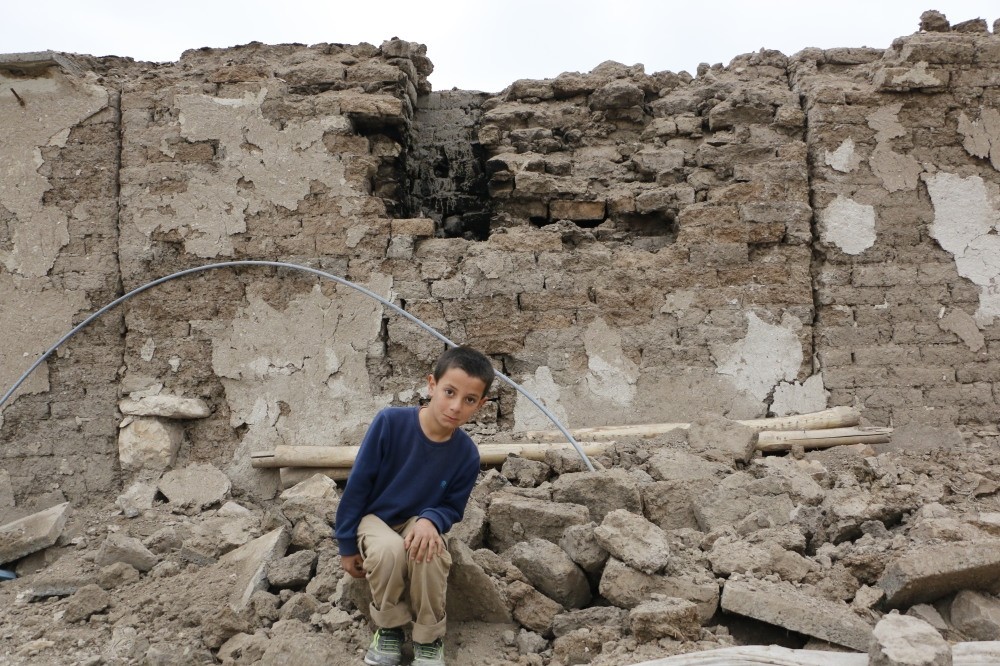 Arda poses in front of his collapsed house.
by Compiled from Wire Services Mar 04, 2017 12:00 am
Arda Dağ, an eight-year-old boy whose family home was devastated during Thursday's earthquake in southeastern Turkey, has been hailed as a hero for saving his three-month-old sister from certain death.

The boy was at home with his mother and sister when a 5.5-magnitude earthquake hit Samsat, a town in the southeastern province of Adıyaman, near the village where the Dağ family lives. Their mud brick house was among those that collapsed in the earthquake, which injured some 30 people. His mother had just stepped out of the house when the tremors started in the afternoon. The boy immediately grabbed Arzu, his infant sister and managed to flee the house.

"I thought a bulldozer was hitting the house when it started shaking. I saw pieces (of ceiling) falling on my sister. I was scared and shouted to my mother. She didn't come. I embraced Arzu and ran. I saw my mother lying on the ground outside the house. I started crying because I thought she was dead. Then, the neighbors came and I saw she had only fainted," he said, recounting the moment the earthquake hit in an interview with Anadolu Agency.

His father Bozan was not at home when the earthquake happened. "I was outside and saw dust rising all across the village. When I noticed it was an earthquake, I ran home. I found out my wife passed out when the earthquake happened. If it wasn't for Arda, Arzu might have died. We will forever be grateful to him," he said. The family now stays in a tent given by local authorities as their house remains in ruins and aftershocks continue in the region.
RELATED TOPICS