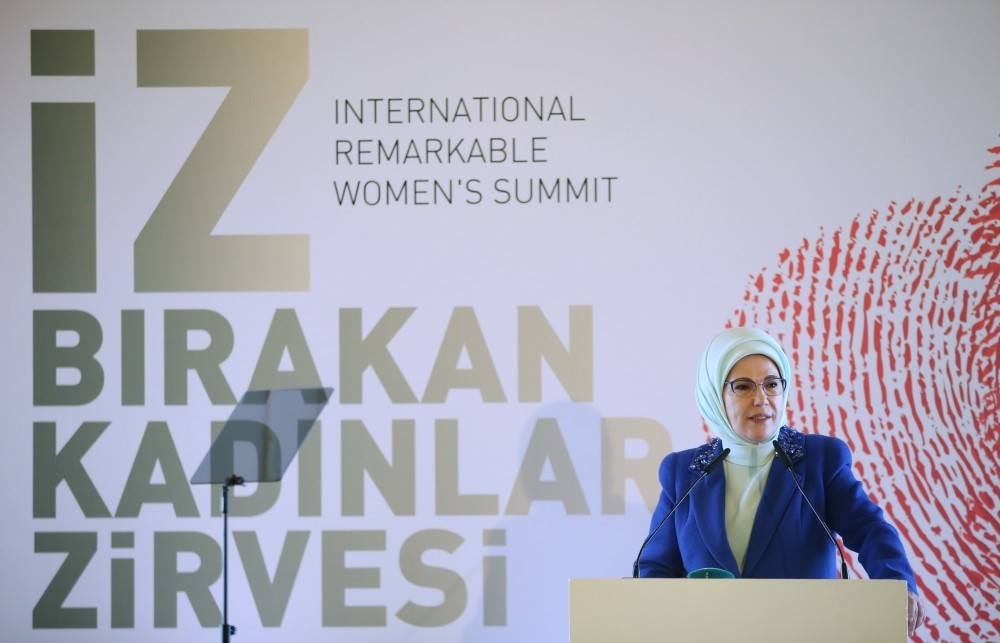 Emine Erdou011fan addressed the International Remarkable Women's Summit hosted by a local municipality in Istanbul.
by Daily Sabah Mar 07, 2017 12:00 am

Addressing a women's summit in Istanbul Monday, First Lady Emine Erdoğan said women in Turkey and around the world face challenges of ‘gender justice' and urged for a fight against misperceptions targeting Muslim women in particular

There is a long way to go toward resolving women's issues, but ending the misperceptions regarding Muslim women is a key issue that needs to be addressed, First Lady Emine Erdoğan said.

Erdoğan was addressing the "International Remarkable Women's Summit" held in Istanbul, an event dedicated to historical and contemporary female figures singled out for their activism and heroic actions.

The first lady stated that for Muslims, the struggle for women's rights should focus on building a world where women and men are viewed as "two halves of a whole" in pursuit of social gender justice. "However, women still face great challenges both on a national and international level. [Muslim women in particular] have to fight an Orientalist approach. We have to be vigilant against this misperception toward women," she said. She was referring to the view of Muslim women as oppressed subjects of their dominating husbands, fathers or brothers, something Muslim women or women in Muslim-majority countries often complain about. Although a mindset that sees women as slaves who are supposed to be confined at home still prevails in some parts of Turkey, women's rights activists tie it to a set of warped patriarchal values not linked to religion or culture.

Turkey's fledgling women's nongovernmental organizations advocate a local approach to resolving women's issues, a notion supported by the country's leaders, who call for society to derive more of its views from Turkish and Islamic civilizations that placed women first in day-to-day affairs and gave more rights to them in comparison with Western societies. President Recep Tayyip Erdoğan himself said at an event in Istanbul about women's issues that theirs' was an approach that holds women in a higher regard than men, rather than a forced equality, in addition to criticizing the "objectification" of women.

Emine Erdoğan said the role of women has been key, especially in the country's struggle for independence in the early 20th century, and women have also played a vital role in "a fair coexistence" of both genders. She said women in Turkey have come a long way in their struggle for their rights, such as the fight for the removal of the state's intervention into their lifestyles, namely, a lifting of a ban on the headscarf. "We now have a strong civic society and women have more roles in all walks of life, from media to politics, academia to the business world, and it is a reflection of women's intelligence, passion and personality," she said.

The first lady said women's plight outweighed men's, and since the Industrial Revolution, they were burdened with more work as they were forced to juggle their family life with the responsibilities of work. She said the past and ongoing conflicts were another challenge for women, who have been the most vulnerable to problems, pointing out that the majority of Syrian refugees who took shelter in Turkey after they fled their war-torn country were women and children.

"In their careers, women face the glass ceiling, and in their private life, it is women who are affected most by domestic violence," Erdoğan said, noting that she and her husband spearheaded a campaign to fight domestic violence and violence in general targeting women. "Our campaign's motto is 'violence towards women is a betrayal of humanitarian values,' and we seek to raise awareness about this issue," she told the summit.

Domestic violence and the murders of women by their husbands, partners and relatives have long been a thorn in Turkey's side and broader media coverage in recent years has made this scar on the society even more visible.

Factors ranging from a warped mindset justifying the killing of women breaking up with their husbands (so-called honor killings) and being given lighter sentences are blamed for the rising number of domestic violence cases in Turkey. Though police protection and shelters are available for women who are threatened by their spouses, authorities say it is difficult to prevent murders or acts of violence through legal measures alone. The government has been working on a plan to improve laws tackling domestic violence crimes while the Erdoğans and other politicians pioneer efforts to raise awareness about the issue.

Emine Erdoğan said Turkey was determined to combat "wrong practices" and "injustice towards women in modern times" and gave the example of mandatory education for girls, which also helped in preventing the disturbing phenomenon of "child brides" that has plagued the country for decades. "We have to be proactive both to resolve global and local issues women face," she added.
RELATED TOPICS