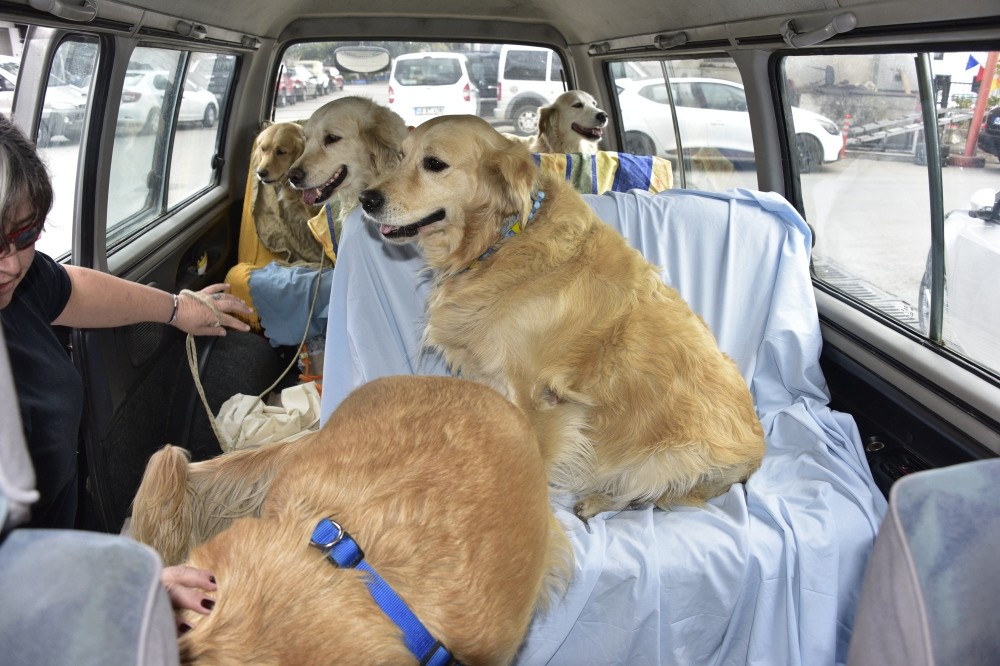 by Yusuf Ziya Durmuş Mar 07, 2017 12:00 am
From a laidback life at a popular vacation resort in Bodrum to the hubbub of the country's most populated city Istanbul, a pack of Golden Retriever dogs popular on social media are looking to adopt new lives.

The "Golden Retriever Gang" made up of 11 Golden Retrievers and a Rottweiler cross tagging along, had their own fans when 56-year-old Şenol Özbakan, a local sailor, decided to put their photos on social media. It was a way for Özbakan, who cared for the dogs all by himself, to raise money for the animals' needs, and soon he found online fame with his antics with the dogs, who accompanied him on the Bodrum streets or swimming with the mustachioed sailor. Alas, this story of animal-human friendship came to an end suddenly in January when Özbakan, who called the dogs his "children," passed away due to heart failure.

After he was hospitalized, the dogs were taken to a temporary home near Bodrum by a group of animal lovers promising to take care of the dogs until he got better and they stayed there after his passing before they were transferred to a local animal shelter. Işkın Moğol Alçı, an Istanbul-based animal rights activist, was among the applicants to the Özbakan family to take care of the animals after concerns were raised that they would not be "at home" at the shelter having been in the care of Özbakan.

Özbakan's daughter approved Alçı to be new custodian of the dogs and the "gang" was sent to live with Alçı at her villa in Istanbul's Kurtköy district. Vahit Çevik, head of the animal rights committee at the local bar association, told Anadolu Agency that dogs will be cared for "better" by their new owner as she had sufficient space for them to roam freely. "They will have a home again and a companion that we believe will give them love (as Şenol Özbakan did)." Çevik also denied media reports that the Golden Retrievers, belonging to a breed often adopted by animal rights activists abroad, will be sent abroad.
RELATED TOPICS