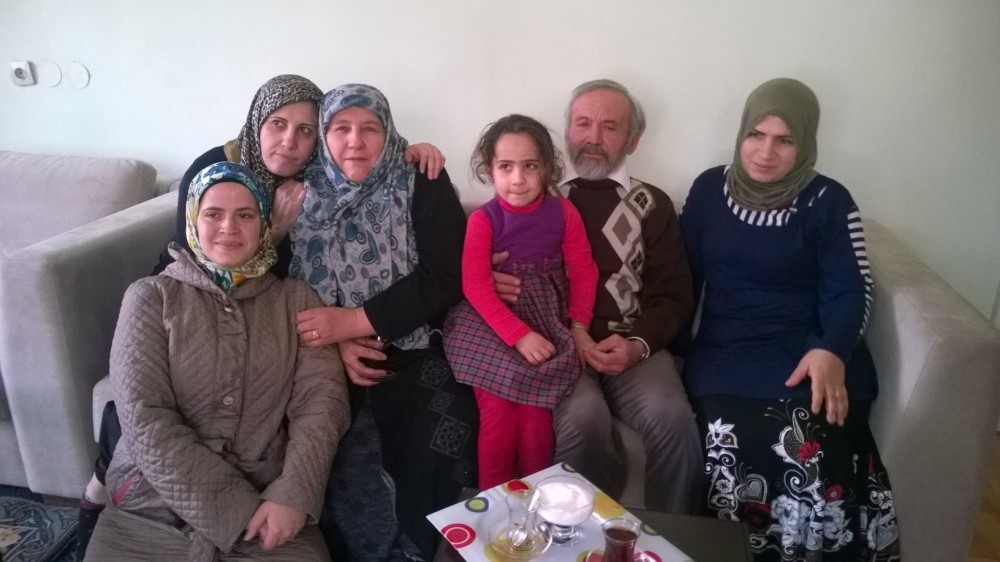 The couple, who will receive the "Goodness Award" from the state-run religious authority in the coming days, offered accommodation for refugees in their home and coordinated aid efforts for them.

Speaking to reporters in their home filled with aid materials sent by charities, the couple gave an account on how they came to pioneer an aid campaign for refugees who fled an ongoing civil war into Turkey.

Living in a neighborhood home to some 2,500 families in Ankara's Altındağ district, Etleç, who worked as a furniture repairman, says he first came across Syrians five years ago.

"We decided to help them but the first year was really difficult as we couldn't help all of them and I couldn't find anyone to assist us in our efforts. I donated my entire pension to them but it was only enough to buy food for families," he said.

It was his chance encounter with an official from a state agency for Turks living abroad.

"He was an acquaintance of the pharmacist living near here and that pharmacist knew me. As they were speaking on how to help refugees, the pharmacist told the guy to see what I've done. Then, we met and I explained to him what the refugees needed immediately. First, we received a donation of 700 heaters and delivered them to refugees. Then, more aid poured in," Cavit said.

Today, Cavit says he does not have to spend all the pension money for refugees but he acts as a coordinator for the aid. The only bedroom of his house is filled from floor to ceiling with humanitarian aid, from food packages to blankets but the couple does not complain. Cavit regularly checks the families of refugees to determine what they need most.

"Everyday, dozens of refugees come to my home and they leave their address. I then arrange the aid for delivery," he said.

Cavit long sought to remain anonymous but the number of refugees visiting their house drew the attention of the media and in the end they became popular figures, eventually leading to the award.

"I never wanted to be awarded for it. I only wanted Allah to reward me for my deeds in the afterlife. But I decided to open up to journalists on what I've done because this means publicity for refugees and therefore, more aid for them," he said.

He says he never felt "tired" while handling the needs of refugees despite his old age.

"It is beautiful to help people. It was very difficult to help them at times, when I had to accompany them at midnight to the hospital, when they fell ill but it really felt good to help someone in need," he added.

His wife Hafize generally handles the problems of women refugees.

"I help them finding rental homes and arrange aid for new furniture. I sometimes deliver food to them, be it day or night," she said.

The couple housed dozens of refugees when they first arrived in the neighborhood.

"Once, we had 20 people staying here," she says, pointing to her two-story house.

"We had nothing to feed so many people. My husband spent all he had for a month to feed them for days," she recounted.

"We can find food for ourselves later but they can't. They don't know our language and they are desperate. I could do more for them if more people helped," she said, asking for charities to give them a warehouse to store the aid.

"They call me 'mother' and Cavit 'father,' we feel like a family. I see (women refugees) as my daughters and young men as my sons. Every morning, I host them at breakfast and they love me so much," she said.
RELATED TOPICS