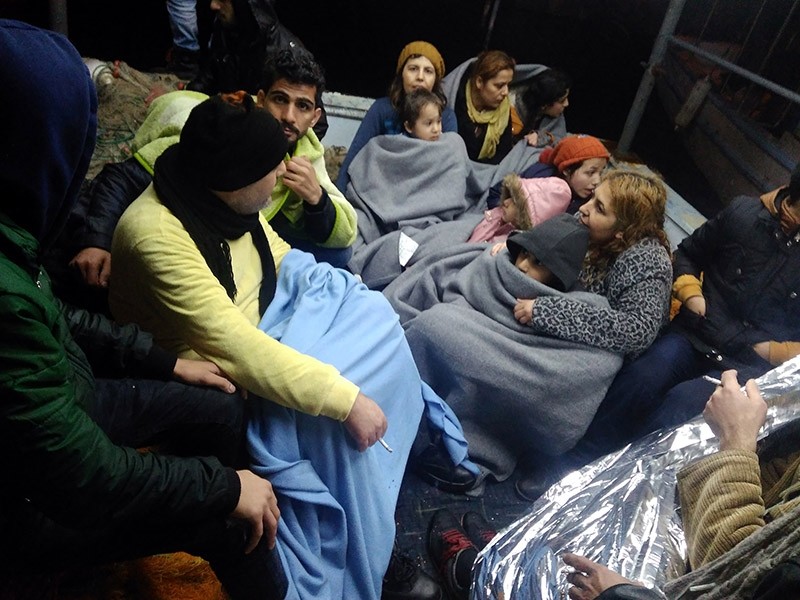 A total of 51 illegal migrants, who were planning to cross the Aegean Sea to reach Greece, have been captured by Turkish coast guard units during two operations in the districts of Kuşadası and Didim in Turkey's western Aydın province.

Coast guard units received information about a group of migrants trying to illegally reach the Greek Island of Samos with a dinghy, upon which an operation was launched offshore Güzelçamlı in the gulf of Kuşadası.

Some 18 illegal migrants were captured in sea during the first operation and brought back to Kuşadası Setur Marina for medical checkups.

The second operation was carried out in Didim's Tekağaç, where a group of migrants trying to illegally reach Greece called out for help, as their dinghy was about to sink.

Coast guard units captured 33 illegal migrants, including children and a pregnant woman, who were all of Syrian citizenship.

The rescued migrants were brought back to Didim, where the pregnant woman was immediately referred to a nearby hospital for medical treatment.

After all necessary health checkups were carried out, the captured migrants from Kuşadası and Didim were brought to the Aydın Provincial immigration authority.

Over the past year, thousands of people have made the short but dangerous journey across the Aegean in a bid to reach Greece, before continuing on to northern and western Europe, however, weather conditions in the winter make the trips even more dangerous.

Turkey's five Aegean provinces of Çanakkale, Balıkesir, Izmir, Muğla and Aydın are the regions most frequently used by refugees leaving Turkey for the EU.

The EU-Turkey agreement reached on March 20, 2016 allows for the return of "irregular migrants" to Turkey from Greece in exchange for Syrian refugees' relocation from Turkey to within the EU bloc.