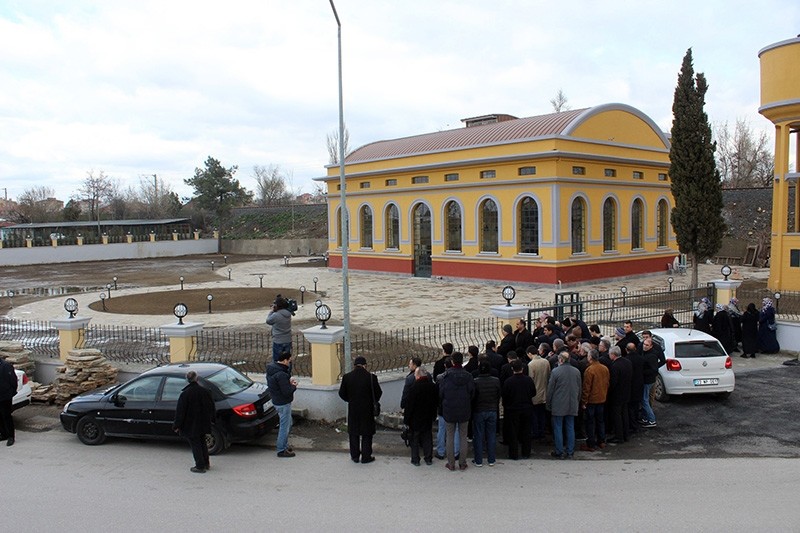 People protest the construction of banquet hall on top of historical cemetery site (IHA Photo)
by Daily Sabah Mar 14, 2017 12:00 am

The construction of a banquet hall by a Republican People's Party (CHP)-led municipality on the site of a Muslim cemetery where a renowned Ottoman-era scholar is believed to be buried has sparked outrage in the city of Edirne. The city's mayor denied that Muhammed bin Qutbuddin İzniki, who penned a religious reference book still popular in Turkey, was buried in the area, although he admitted that several graves were located there.

A group of people opposing the construction of the wedding banquet hall said they do not want it and consider it a disrespectful move, claiming it has historically been the grave site of their ancestors.

Lawyer Ahmet Faruk Temizkol told the media that the construction project violates a number of laws, including the Law on Protection of Cemeteries, the Code of Protection of Cultural and Natural Properties and others. "Legal proceedings are ongoing and the interior ministry has authorized an investigation against municipal officials," Temizkol said.

Others have noted that they had been fighting since 2003 to restore the cemetery. The former Edirne mayor reportedly forwarded a petition written by the community to the Museum Directorate, which then forwarded it to Ankara. Excavations were then launched in the area and tombs were discovered.

The community called on President Recep Tayyip Erdoğan to help restore the cemetery and close the banquet hall.

Mayor Recep Gürkan said they would proceed with plans to build the banquet hall and promised there would not be "music events" in respect of the religious site, and that gravestones found in the area will be exhibited in the courtyard of the banquet hall. "I would preserve the tomb if there was really a tomb," he told reporters yesterday. He promised he would not allow people to host weddings "with alcohol and music" at the hall.