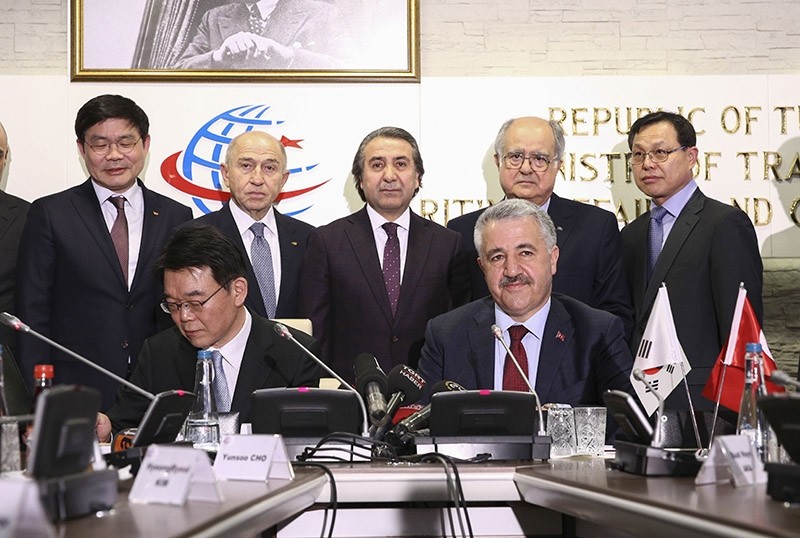 Transport, Maritime and Communications Minister Ahmet Arslan sits (R) next to his South Korean counterpart in the premises of his ministry in Ankara. March 16, 2017. (AA Photo)
by Anadolu Agency Mar 16, 2017 12:00 am

Turkey has set the ball rolling for the longest suspension bridge in the world following a formal signing ceremony in Ankara, which will see Turkish and South Korean firms work together in the multi-billion-dollar project.

The bridge would span 32 meters longer than the currently-held record of the Akashi-Kaikyo bridge between Kobe and Awaji Island in Japan.

Speaking at the signing ceremony, Transport, Maritime and Communications Minister Ahmet Arslan said: "The bridge will make a huge difference towards our community, it will make life easier and stimulate economic growth in the region.

"It will make travel time shorter by connecting [Turkey] with Europe, and help in exports and imports," he said.

He said 12 financial institutions had indicated their willingness to finance the bridge's construction.

On Jan. 26, a consortium of South Koran companies -- Daelim, SK E&C and Limak -- and Turkey's Yapi Merkezi OGG won a tender and a 192-month lease for the historic bridge in Canakkale, which is a gateway to the Gallipoli World War I battlefields, north of the narrow strait.

The 3.6-kilometer (2.2-mile) crossing will be built about 200 kilometers (124 miles) southwest of the country's economic heart Istanbul, between Gallipoli on the European side and Lapseki on the Asian side.

Also, speaking at the signing ceremony, South Korean Minister of Land, Infrastructure and Transport Kang Hoin said his country's companies will complete the project by 2023, when Turkey would celebrate the 100th year of its founding.

"Korean companies will share their experiences in the economic development of South Korea with Turkey and also help in the transfer of technology," he said.

He said the project would further accelerate confidence between South Korea and Turkey. "We can work together with other countries in the Middle East and Africa," he added.

Turkey and South Korean transport ministers also inked memorandum of understandings on railroads, roads, research and development, and for expansion of joint economic cooperation between the two countries.

Jason Jaehyun Ahn, president of SK E&C, another South Korean company involved in the bridge and Eurasia tunnel projects in Turkey, told Anadolu Agency: "We have been watching the Turkish economy's growth and hope that it would grow faster than ever.

"We believe that after completing this bridge, our Turkish partners, who already have technological competence in building bridges, would be able to conduct such projects by themselves elsewhere in the world."

About doing business in Turkey as a foreign investor, Jason said the South Korean company was willing to participate in more Build-Operate-Transfer type projects in the country.

"The Turkish government has been doing a great job. The Canakkale project bidding process was very transparent and accountable. We hope that all this government support and accountability can be maintained in the future projects."

Yoon Tae Seob, senior executive vice president of Daelim Industrial -- another South Korean company involved in the construction of the Canakkale Bridge -- said while there were three suspension bridges in Turkey, none of the Turkish companies could build such a project on their own.

"I believe that after this Canakkale 1915 Bridge [gets] completed, our Turkish partners will be able to build such projects by themselves. We want to collaborate in know-how transfer to support Turkish companies," he said.

Yoon urged international investors to evaluate opportunities in Turkey. "We are seeking to get chances to participate in Turkish infrastructure projects like in Izmir and the new channel in Istanbul," he said.

Ebru Ozdemir, chairwoman of Limak Investment, which is an arm of the Limak Group Companies, said the bridge project will be a turning point in the construction of such infrastructure by Turkish companies.

"We hope the Turkish companies will get the technological know-how for such mega projects by working together with Korean partners," Ozdemir said.

About partnership with South Korean companies in other countries, she said: "Turkish companies have great experiences for BOT projects like infrastructure, airports and energy.

"We would like to combine our expertise in PPP [public-private-partnership] projects with their experience to build more projects, especially in Africa and the Middle East.

"Turkey needs this bridge as soon as possible. The goal is to complete the bridge before 2023, hopefully, we would get to break a world record."

Basar Arioglu, chairman of Yapi Merkezi Construction and Industry of Turkey, said his company is very proud of taking part in the prestigious project.

Like the Eurasia Tunnel that will connect the Asian and European continents underneath the Marmara seabed, the Canakkale 1915 Bridge will also be a technological masterpiece, Arioglu said.

"We have been working together with South Korean companies like SK E&C in the past in Turkey.

"We are looking forward to cooperating in other countries in the Middle East and Africa," he added.

The construction of the Canakkale 1915 Bridge, spanning over 2,000 meters between Lapseki and Gelibolu in the northwestern province of Canakkale, will start on Saturday, which also marks the anniversary of one of the Ottoman Empire's final victories, with a groundbreaking ceremony.