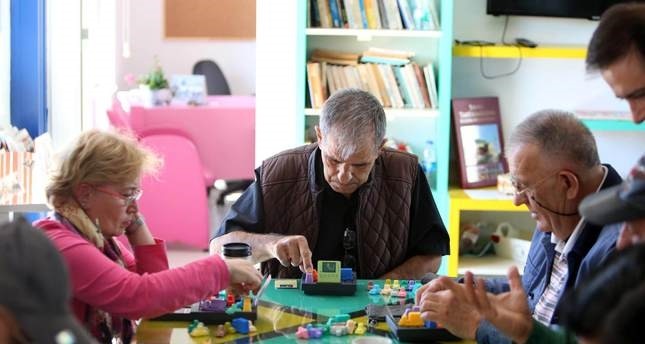 People playing memory games at a center for the senior citizens in city of Antalya.
by Daily Sabah Mar 17, 2017 12:00 am

Statistics on Turkey's elderly population reveal that the senior citizen populace has increased more than 17 percent in the last five years, and the rate of those indicating they are happy with their lives has also increased, while the large proportion of single elderly women is raising concerns

The release of state-run statistical agency TurkStat's latest figures released on Thursday reveal that Turkey's aging population is gradually increasing. The population of senior citizens aged 65 and older increased 17.1 percent over the last five years, from 5.6 million in 2012 to 6.6 million in 2016, according to the figures. The recently released data may boost efforts to promote "healthy aging" while Turkish officials pursue policies that encourage families to have more children in response to the concerning trend. The figures also reveal that while the proportion of elderly people who are satisfied with their lives increased, the rate of single or widowed elderly women surpassed that of males, raising cause for concern.

TurkStat says the elderly made up 8.7 percent of the total world population last year and Turkey ranked 66th rank among 167 countries with the highest proportion of elderly citizens in its populace.

The increase comes amid growing concern over the aging population. Ankara continues to encourage population growth in the country of more than 78 million people. Turkey hopes to boost its population numbers by offering incentives to larger families such as longer paid leave and social benefits. Since his tenure as prime minister began, President Recep Tayyip Erdoğan has continued to promote population growth, advocating that families should have at least three children to restore Turkey's population.

Projections made earlier by TurkStat show that the elderly population will increase to 10.2 percent by 2023 and is expected to rise even further in the following decade. Experts link these projections to a decline in fertility and new treatments being available to increase longevity.

The majority of the elderly population is female, TurkStat figures indicate. Women live longer in the country, as the recent figures on life expectancy at birth show. Life expectancy is 80.7 for women while it is 75.3 years for men, according to the latest data. TurkStat also says the average remaining life span for people at 65 is 17.8 years.

The quiet northern city of Sinop, located on Turkey's Black Sea shore, once again dominated the list of cities with the highest proportion of elderly citizens, at 18.1 percent in 2016. Sinop also often dominates the lists of people with the highest life satisfaction. It was followed by Kastamonu, another city in the Black Sea region that is dotted with mountain ranges, a cool climate and highlands. The lowest proportion of the elderly was in Şırnak in the southeast, with only 3.2 percent, followed by Hakkari and the eastern city of Van. Turkey's southeastern region typically hosts large families and has seen a high rate of internal migration in the past decades as economic growth in the region is stunted by the terror threat.

Though the longevity of Turks has increased, the number of centenarians still remains low. They constitute only 0.1 percent of the population and totaled 5,232 people last year.

Istanbul, which is also the country's most populated city, had the most centenarians last year with 680, followed by Şanlıurfa in the southeast with 237 people and the capital city of Ankara with 219 people. Ardahan in the northeastern most part of Turkey had the least centenarians with only two people.

The difference in longevity between men and women also affects the number of widowed men and women. The proportion of widowed men stood at just 12.7 percent compared to 50.4 percent for women in 2016. This means a lonelier if longer life for women and another result of the TurkStat statistics show 76.7 percent of the elderly population living alone is women. Sinop, again, has the most one-person households in Turkey in relation to the elderly population.

Figures also show that the poverty rate among the elderly increased and elderly women are poorer compared to the men in Turkey where officials are struggling to increase the number of women in the workforce to ensure their economic independence. In general, it was only 11.9 percent of elderly population's participation to labor force and most are farmers or those working for farmers.

According to TurkStat figures, from 2011 to 2015 the majority of the elderly died from circulatory system diseases while the rate of those dying from Alzheimer's disease doubled between 2011 and 2015, with no data available for 2016. However, the elderly apparently do not complain much as a life satisfaction survey shows that the number of elderly who are fine with their general health status increased. In 2015, 56.8 percent of participants in a life satisfaction survey indicated that they were happy with their lives, compared to 64.5 percent in 2016. The most important source of happiness for the elderly is their families, according to the survey.