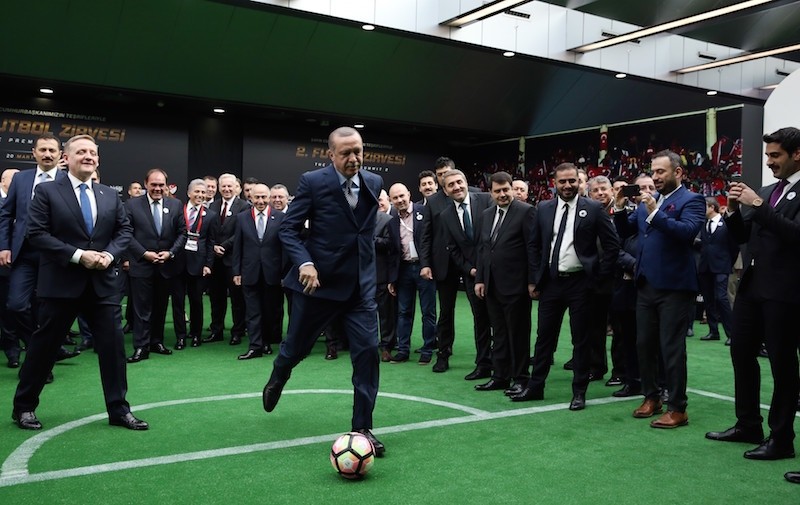 President Recep Tayyip Erdoğan said that even though Turkey ‘deserved’ it, it was not given the Olympics saying, ‘There are certain tricks being played against Turkey’

As the Tokyo Olympic Games corruption claims scandal came out last year, President Recep Tayyip Erdoğan said there were certain tricks being played against Turkey that prevented the country from hosting the Olympics.

Speaking at the International Football Summit at the Haliç Congress Centrum Istanbul on Monday, Erdogan said, "We may not have been able to bring the Olympics to our country yet, but you also know about the tricks [being played against Turkey] here ... I've experienced it myself."

"They did not give us the Olympics even when we had the right [to host the event]. They gave the Olympics for the second time to those who had already hosted it before," he said.

Erdoğan said that Turkey had a proven track record in terms of hosting mega events and preparing the necessary infrastructure for it.

"We have hosted 659 international sports organizations since 2003 and have proved that we have the capability," he said.

On a different note, President Erdoğan said Turkey grew threefold, especially in the sports field, over the last 14 years.

As many as "1,924 new sports facilities have been built in the last 14 years," he said, adding that 321 football fields were currently being built around the country as well.

In February, the European Youth Olympic Festival was hosted by Turkey in eastern Erzurum province for the first time in over 25 years. Known as the EYOF-2017, the festival was carried out with the participation of some 675 athletes, including 69 Turkish athletes, from 34 countries.

This year in May, Istanbul will also host the prestigious Final Four of European basketball's top club competition, the Euroleague.

Tokyo defeated Istanbul in the second round of voting for the 2020 games by 60 votes to 36, after Madrid was eliminated in the previous round. It was the Turkish city's fifth attempt to host the Summer Olympic Games. The 2016 Summer Games was held in Brazil's Rio de Janeiro city.

However Tokyo 2020 bid is being investigated after questions were raised about payments by the bid committee. Japanese media had last year reported the bid team made payments totaling more than $2 million to a Singapore bank account linked to Papa Massata Diack, son of disgraced former international athletics chief Lamine Diack.

The elder Diack, a former International Olympic Committee (IOC) member, is still under a French police investigation for corruption at the International Association of Athletics Federations (IAAF), athletics' governing body.

Tokyo has been embarrassed by a number of woes since 2013, including scrapping the design for the centerpiece Olympic stadium, delaying construction.

Meanwhile, Youth and Sports Minister Akif Çağatay Kılıç said, "Turkey has more chance than Germany to win to host the European Championship in 2024," adding that Europe must not be hypocrite.

On another note, Turkish Clubs Union President Göksel Gümüşdağ stressed that Turkey must put "video referee" into action in the Spor Toto Super league next year in order for the league to be fairer.