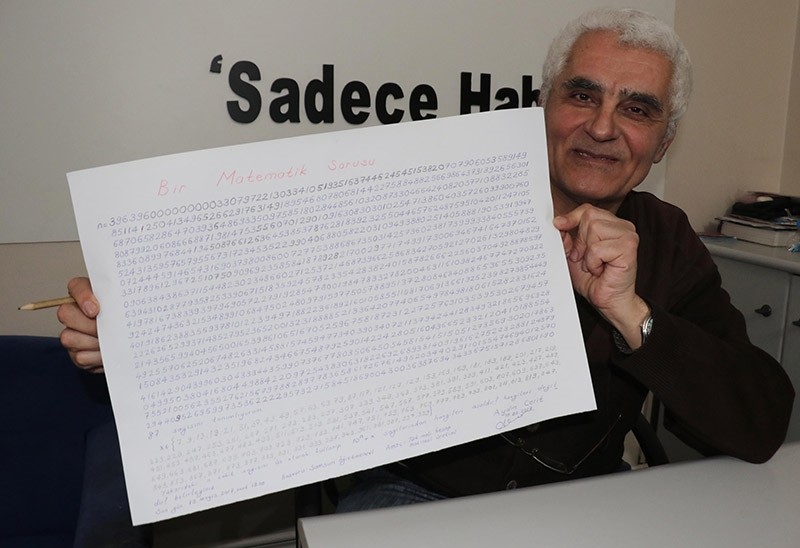 A retired mathematics teacher living in Samsun announced that he will give all his personal assets to the person who solves the mathematics problem he came up with.

Aydın Cerit, 59, who wants to urge Turkish mathematicians to build a domestic calculator and raise awareness of his work focusing on prime numbers, has initiated a competition. He promises to give all his savings as well as properties to the person able to solve the problem he came up with. The deadline is May 19. Speaking to the press, Cerit said he has been working on numbers for many years now.

"There is no calculator production in Turkey. I believe that a calculator, which can solve even the most complex mathematics problems, can be built under the light of my own work. I want to raise awareness among people and attract the attention of the government as well. Building a complex calculator is not impossible. To draw attention to my work, I decided to write a mathematics problem that I believe not even a computer can solve. I promise to give all my savings as well as a property to the person who solves and delivers the answer to me by May 19."

This is not the first challenge that Cerit has presented to mathematicians. Previously, the retired teacher offered gold to the person who solved another problem yet no one submitted their answer within the six-week period he offered.

Last year, Cerit announced that he was to give his pension for 93 months to the person who could solve two mathematics problems he came up with. The problems were solved by three people, however, the lucky winner was Professor Afgan Aslanov of Beykent University. Yet, the academic sent a letter to Cerit and told him that he did not want his pension and he just wanted to see whether he could solve the questions or not.