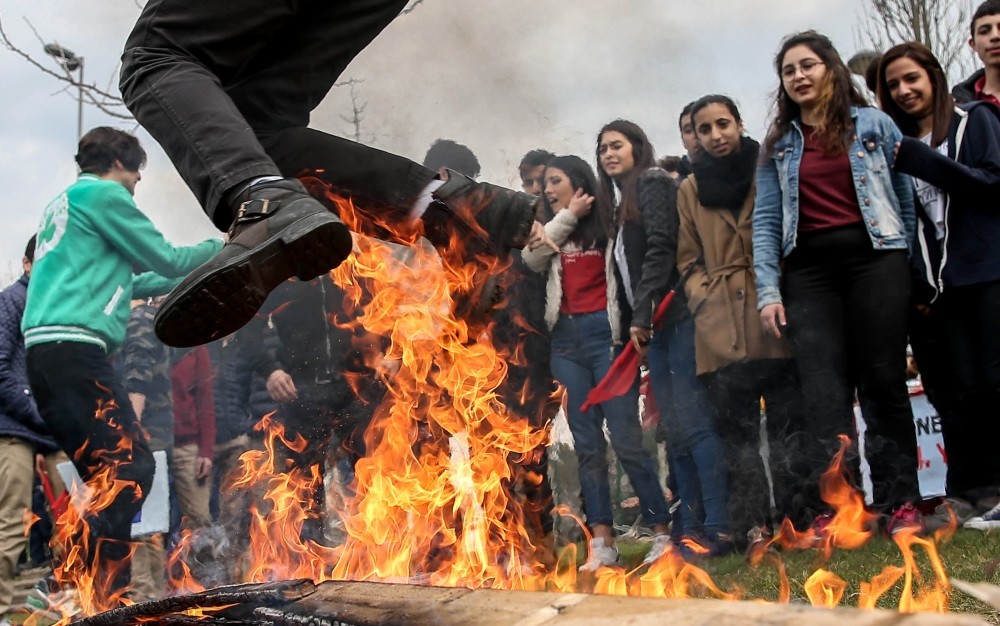 People jumping over a bonfire at a Nevruz celebration in an Istanbul park.
by Daily Sabah with Wires Mar 22, 2017 12:00 am

Nevruz, a festival marking the arrival of spring, is observed across Turkey with the country's leaders sharing messages of unity, in parallel with the multi-ethnic and multi-faith nature of the event

Turkey marked Nevruz Tuesday, an ancient festival widely observed in the country, as well as in Iran, Afghanistan, Central Asia and other countries in the region. The festival, which celebrates the arrival of spring, was an opportunity for politicians to express messages of unity in a country that has been home to multiple faiths, ethnicities and civilizations throughout its history.

Prime Minister Binali Yıldırım was the guest at a ceremony to mark the day in the capital Ankara. The event was organized by a foundation from the Alevi community, which also commemorates it as the birthday of Ali, the Prophet Muhammad's cousin and companion, who is revered by Sunnis and Alevis. Addressing an audience including foreign guests, Yıldırım underlined the centuries-old brotherhood between different faiths and ethnicities and highlighted how Alevi wisdom shaped the Ottoman civilization.

President Recep Tayyip Erdoğan also issued a written message to celebrate Nevruz, saying the festival has been a symbol of the onset of spring as well as brotherhood and friendship in a broad geographical area. "At a time when our region is facing more challenges, we have to reclaim the spirit of resurrection evidenced in Nevruz," Erdoğan said in his message.

The festival was not without tensions as the terrorist group the PKK, which claims to defend the rights of Kurds, used the event for its propaganda. Several demonstrators attending a rally in southeastern Diyarbakır organized to mark Nevruz unfurled photos of the jailed PKK leader, while police shot a man trying to enter the venue with a knife after he tried to flee upon being detected. Elsewhere, rallies organized by a political party known to have ties to the terrorist group were held without incident.

Although the origins of this ancient tradition are a matter of historic debate, Nevruz, which means "new day" in Persian, is said to have its origins in Zoroastrianism, the religion of pre-Islamic, Persian empires. According to this religion, March 21 is considered the day of the earth's creation and the first day of the new year. While some claim that Turks living in Central Asia were the first people to celebrate the coming of spring, the principle view of Nevruz according to Turkic tradition is the celebration of independence. It marks the day of departure from Ergenekon, where Turks were trapped for years before a blacksmith melted the rock and Asena, a grey wolf, led them to freedom. Ever since, Nevruz has been accepted as the beginning of the new year by Turkic nations around the world and is still honored with vibrant celebrations, including festivals.

The official Nevruz celebrations in Turkey were attended by local administrators in 81 provinces while concerts were held and will be held in the coming days by musicians from around the world to celebrate the festival. Celebrations are usually marked with the lighting of and jumping over bonfires, and other customs.

Officially registered on the UNESCO list of Intangible Cultural Heritage of Humanity, the General Assembly of the United Nations has declared March 21 the "International Day of Nevruz."
RELATED TOPICS