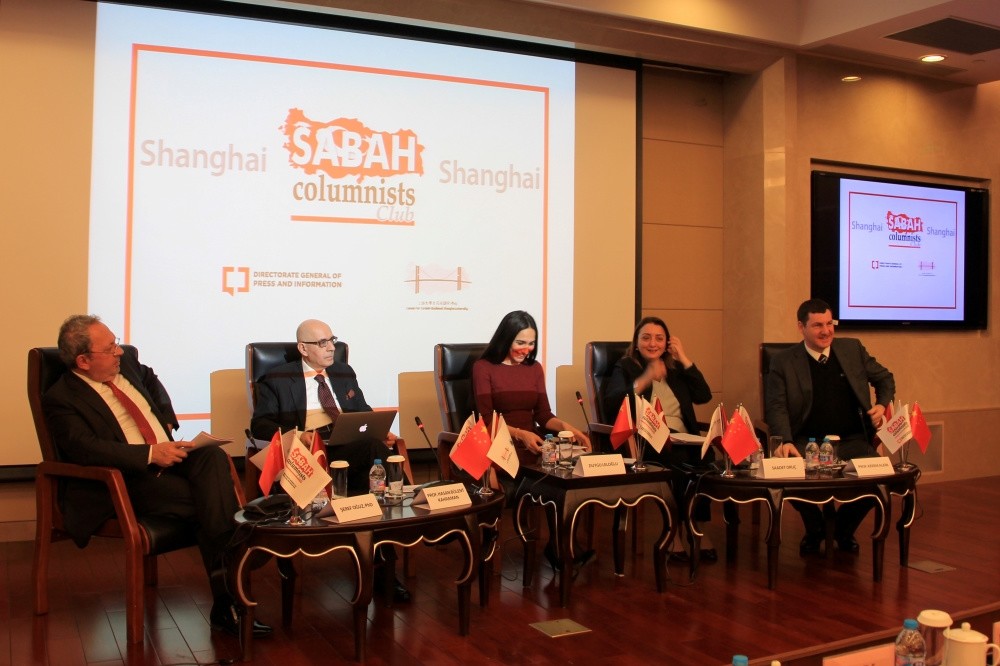 by Duygu Leloğlu
Mar 25, 2017 12:00 am
The latest edition of Sabah Columnists Club, which brings together columnists from Daily Sabah and its sister the Sabah newspaper, was held in Shanghai on Friday and touched upon improving ties between China and Turkey.

The panel, which brought together Turkish columnists and Chinese media, was held at Shanghai University. Along with bilateral ties, participants discussed the July 15 coup attempt in Turkey, the Gülenist Terror Group (FETÖ), which is blamed for the putsch bid, as well as Europe's"hypocritical" stance towards Turkey. Daily Sabah columnists Saadet Oruç and Professor Kerem Alkin, as well as Sabah columnists Şeref Oğuz and Professor Hasan Bülent Kahraman, attended the event moderated by A Haber presenter Duygu Leloğlu.

Oruç thanked China for its support of Turkey in the aftermath of the foiled coup attempt and accused the European Union and Western media of "siding with the group behind the coup."

"They now work for Turks to reject the constitutional changes in April 16 referendum. They want a powerless Turkey which they deem as a perfect partner. For this reason, both Western leaders and the media target [President] Recep Tayyip Erdoğan. Europe rapidly loses its loyalty to its own values. This is why it is important to develop better ties between Turkey and China," she said.

Kahraman said Turkey and China met the conditions "to build a closer, deeper relationship," adding, "Such a relationship would not only be beneficial for two countries but also for the world."

Daily Sabah columnist Professor Kerem Alkin said Turkey was determined to boost its standing among developing countries and China had "many cooperation opportunities with Turkey" in terms of China's "One Belt, One Road"policy, in reference to China's efforts to revive the Silk Road by developing economic cooperation with Eurasian countries. "Turkey plays an important role in connecting the east to the west, with its mega projects; and neither the recent coup attempt nor other attempts would succeed in curbing Turkey's rise," he added.

Turkey has built a new bridge on the Bosporus, a major waterway between Europe and Asia, and another bridge on the Çanakkale (Dardanelles) Straits is in the works. The country also plans to build Canal Istanbul, which will be an alternative to the Bosporus, while a third airport for Istanbul is also under construction as part of the country's commercial growth ambitions.

Şeref Oğuz said China is Turkey's second largest trade partner and highlighted the increasing trade volume. "Turkey is an important partner in terms of China's direct investments. We currently host 786 Chinese companies. Turkey is situated right in the middle of the center of power shifting from the Atlantic to the Pacific region, and we are in a unique position to help China meet the West and the West meet China," he said.

Answering questions after the panel, Professor Guo Changgang from Shanghai University said Turks and the Chinese "need to know each other directly, rather than learning about each other from the Western media."

Xu Wei, spokesman of the Shanghai Municipality Government, said the Chinese people have a great interest in Turkey, noting that President Recep Tayyip Erdoğan remains a popular figure in China. "As the municipal government, we are eager to facilitate the meetings of Turkish and Chinese media," Xu Wei said.