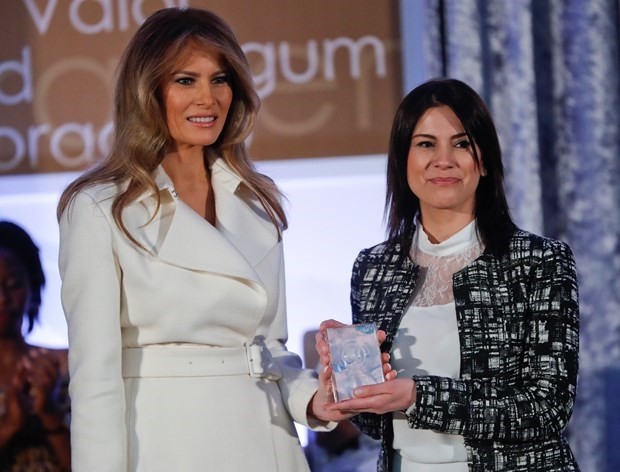 by Daily Sabah with DHA
Mar 30, 2017 12:00 am
Saadet Özkan, a 39-year-old elementary teacher who helped get the school principal accused of child abuse arrested for a second time, received on Wednesday the International Women of Courage award by the U.S. State Department.

Mrs. Özkan, who nowadays works as an activist, traveled to Washington to receive the award which was presented by First Lady Melania Trump and Under Secretary of State for Political Affairs Thomas A. Shannon.

Özkan had spearheaded efforts for the arrest of Adil Ş., a former principal of the school where she worked, upon charges of sexually abusing six girls between the ages of six and 11.

The defendant was released pending trial in 2015 and was expected to be released in subsequent hearings before Saadet Özkan sought the support of activists to draw attention to the case.

Özkan had written to a Prime Ministry office handling public complaints about the case and mobilized NGOs for the case.

Prosecutors have asked that he be given a life sentence but judges ruled for his release due to a lengthy detainment in the pre-trial phase.

Since Özcan launched her single-handed campaign, the Ministry of Family and Social Policies as well as women's rights activists have been involved in the case, demanding that a tougher sentence be given to the defendant.

Eventually, a court has ordered re-arrest of Adil Ş., who denied the charges. A final verdict is expected in the upcoming hearing scheduled for May.

"(Özkan) deliberately chose to work in a village school (after receiving a teaching degree), believing she could make a difference that way. After uncovering a decades-long pattern of sexual abuse in the school, she forced a criminal investigation of her principal, persevering in the face of pressure to drop the case. When a serious car accident left her bed-ridden for several months, she organized support from the İzmir Bar Association and the Turkish Confederation of Women's Associations to help carry the case forward," a short biography of Özkan on State Department's website read, detailing the heroic teacher's efforts.

She is among 13 women from Iraq to Vietnam chosen for the award that "recognizes women around the globe who have demonstrated exceptional courage and leadership in advocating for peace, justice, human rights, gender equality and women's empowerment, often at great personal risk."

Özkan was already awarded last year by a Turkish NGO for her contribution to society. In a speech at the award ceremony, she decried the abuse of children.

"The children should not be the prey of abusers and I ask people to hear the screams of abused children and reach out to them. We should build a better tomorrow for them and if we do not prevent children from falling prey to abusers, we will be condemned to darkness," she said.
Last Update: Mar 30, 2017 1:07 am