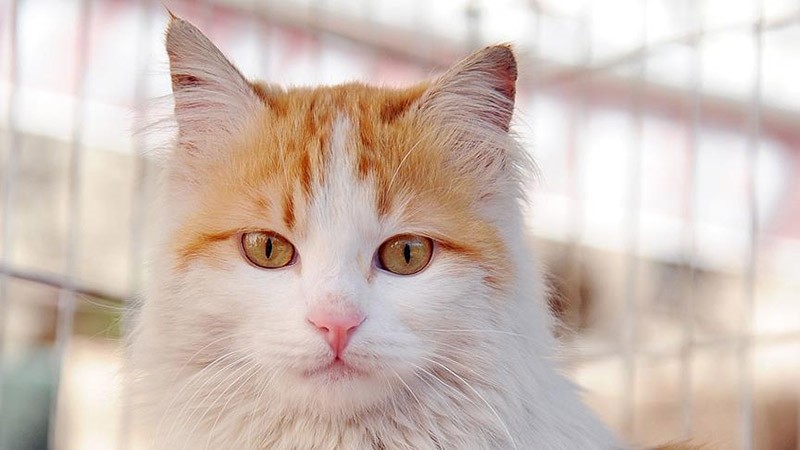 A cat that was rescued by Turkish soldiers in Syria's al-Bab during Operation Euphrates Shield has found a new permanent and loving home at an Istanbul bookstore.

The Kırmızı Kedi (Red Cat) Publishing House has adopted eight-month old Barış (meaning 'Peace' in Turkish) after Specialized Sgt. Ömer Özkan brought the cat to Turkey from the ruins of al-Bab, which was liberated from Daesh by Free Syrian Army (FSA) forces backed by the Turkish Military in February.

Özkan traveled with Barış to the southern Turkish city of Gaziantep, where he was transferred to the capable hands at the Improving the Life of Living Animals Association (CAHİDE). From there, CAHİDE received adoption requests from people who wanted to welcome the lucky feline into their homes all around the world.

After reviewing the outpouring of requests, leaders of the association selected Haluk Hepkon, the owner of the Red Cat Publishing House in Istanbul, to continue caring for Barış.

Hepkon sent bookstore staff member Salih Yavuz to Gaziantep to retrieve the cat, who then arrived in Istanbul April 9 to begin its new life at the publishing house. "He is now the most precious member of our staff," Hepkon told Hürriyet, adding that the top priority was to make Barış feel safe in his new home.

"The fact that Barış will live in a publishing house called 'Red Cat' is the right ending to his story. The humanity that our soldier showed should not have been left half-finished," Hepkon said.

Adding that Barış the cat represents the legacy of the bitter events that transpired in Syria and of the role of Turkish soldiers in the country, Hepkon added, "Barış (Peace) came to the Red Cat bookstore and I hope it also comes to Syria and Middle East."