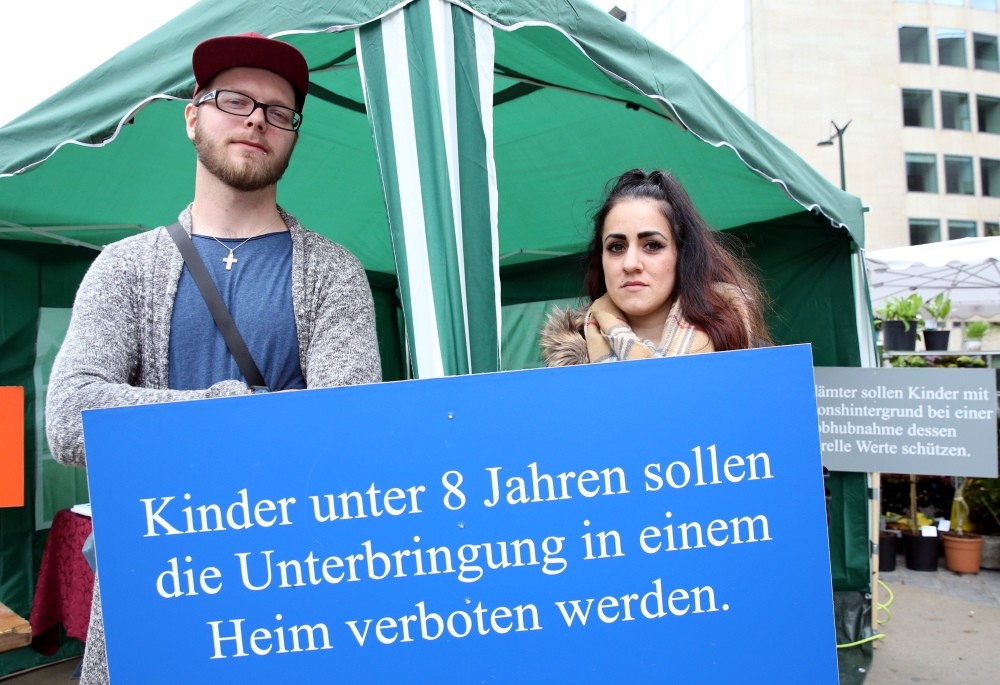 Setting up a tent in front of EU institutions in Brussels, a group of demonstrators protested against Germany for taking away children from Turkish families in what they call ambiguous and unfair adoption practices

The head of a Turkish-German nongovernmental organization and a group of families from Germany took their cause against Jugendamt, Germany's infamous Youth Office, to Brussels, the heart of the European Union. In a tent they set up near the headquarters of the EU institutions, they called on Germany to end the practice of taking away Turkish children from their families that have even the slightest problem in the household and placing them with German foster parents instead of Turkish ones.

A Turkish mother and her German husband, a grandmother separated from her grandchildren and Kamil Altay, head of Umut Yıldızı (Star of Hope), a Turkish association based in Germany that advocates against Jugendamt's policies, joined the protest.

At Schuman Square in Brussels, the demonstrators called on Germany to hear their voice and review its adoption practices.

The Dahlhoff family had all three of their children placed under state care when they failed to report a health condition of their four-year-old child, according to authorities. The children, the youngest being one and a half, were handed to three separate foster parents and Ayşe and Patrick Dahlhoff are only allowed to visit them twice a week. They blame German authorities for deliberately separating the siblings from each other by placing them in different foster homes. Ayşe Dahlhoff said the police visited them last year to take away the children. "Three officers held my arms and twisted them when they confronted them. They left with my children," she said. She questions why the children were not given to her mother. "I wonder what they are afraid of," she said. Her husband Patrick says it was "an evil act" and "a nightmare for them" to be separated from their children. The children's grandmother Zeynep Özsarıoğlu said they launched "a battle" to take the children back. "I am very worried both for the children and their parents. The children did not want to be separated from their family but they were taken away anyway," she said.

Kamil Altay, who spearheaded the protest, said their demonstration aims to raise awareness of the situation of children put up for adoption. "It is not only about the children of Turkish and Muslim families. It is about every family with children, including those in other European countries. We also want Germany to place these children under the care of their relatives, a grandmother, a grandfather, uncle, aunt or other relatives," he said.

Altay said the matter is important especially for children of migrant families. "They can only preserve their own culture and mother tongue if they are placed under care of their relatives," he said. Altay adds that it is unclear how these children are treated in foster homes and some children have succumbed to a life of crime after they were taken away from their families.

In a video posted on his Facebook page, Altay said Germany should openly declare statistics about children taken away from their families and claimed authorities simply registered the children set for foster homes as "German nationals," ignoring their ethnic background. "We do not know how they are treated at foster homes. We want answers about the children. Do they attend school? Are they able to find a proper job when they grow up? Are they driven into prostitution or drug addiction?"

Jugendamt is accused of separating tens of thousands of children from their families based on minor and often baseless reasons. According to 2015 data, 77,645 children were taken away from their families and another 48,059 in 2014. The number was only 25,664 in 2005. Immigrant families claim the adoption practice "assimilates children" and makes them foreign to their own culture.

A law implemented in 2012 had accelerated the adoption process. Sometimes, a child being involved in a brawl at school is sufficient for the child to be taken away from the parents, who are blamed who their child's behavior. Some Muslim families claim their children are raised as Christians in foster homes. Cultural differences pose a challenge for families who find it hard to adopt strict German rules in child-rearing. Some families claim they "lost" their children to Jugendamt because they did not know shouting at their own child would constitute a violation of rules paving the way for adoption.

Turkey's Family and Social Policies Ministry is attempting to popularize the concept of foster families among Turkish families living in Europe in order to reduce the number of Turkish children adopted by non-Turkish or non-Muslim families.